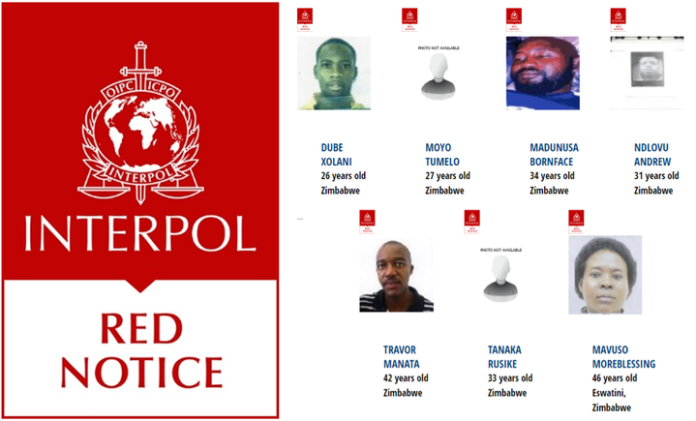 SEVEN Zimbabweans, including a man from Gweru who brutally murdered his wife and left their six-month-old son suckling from the corpse, have been placed on the International Police Organisation (Interpol) most wanted list for evading arrest after allegedly committing serious offences. Tanaka Rusike (33) from Gweru, who has been on the run since December 2017, is wanted for allegedly killing his spouse, Nozipho Tecla Mpofu, in cold blood and leaving their child suckling and cuddling his mother’s corpse for nearly 24 hours before the crime was discovered.

Alert neighbors discovered the child beside his mother’s lifeless body after he started crying the following morning. The seven are among 7 600 criminals who have been placed on Interpol’s Red Notice and are wanted for committing offences ranging from terrorism, corruption, human trafficking and escaping lawful custody. A Red Notice is a request to law enforcement agencies worldwide to locate and provisionally arrest a person pending extradition, surrender, or similar legal action.

The notice is issued for fugitives wanted either for prosecution or to serve a sentence after judicial proceedings in the country issuing the request. Interpol has issued 34 Red Notices for fugitives wanted in 15 SADC countries, with Eswatini (14) accounting for the most wanted fugitives followed by South Africa (9).

However, Interpol does not publish the names of all wanted criminals, a deliberate tactic to avoid alerting fugitives who will likely limit travelling once they are aware of a Red Notice against their name.National police spokesperson Assistant Commissioner Paul Nyathi told The Sunday Mail yesterday that Rusike has been on the run for more than three years.

“I can confirm that Tanaka Rusike of Gweru is on the Red Notice list,” said Asst Comm Nyathi. “He is wanted in connection with a murder case involving his wife which took place in 2017. “Being placed on the Red Notice indicates that he is wanted and can be arrested anywhere in the world where he is located.” Interpol is also looking for Bornface Madunusa (34) of Gokwe, who is wanted by police to answer to charges of murder and has also been placed on the most wanted list.

In 2018, Madunusa, who was based at 5 Infantry, Battlefields in Kwekwe allegedly murdered his 28-year-old wife Eunice Marimbire by strangling her with a rope after accusing her of infidelity. He fled from the scene leaving Marimbire’s body lying on the floor, covered by blankets before it was discovered by his landlord the following morning. Moreblessing Mavuso (46) from Bulawayo, who is also on the Red Notice, is wanted by police in Eswatini for fraud and corruption.

According to Eswatini media reports, Mavuso, who was married to former parliamentarian Machawe Mavuso, disappeared soon after she was charged for making fraudulent payments while working for the country’s Finance Ministry as an assistant accountant. Two of her accomplices who worked in the Ministry of Agriculture were arrested and appeared in court. Mavuso is alleged to have taken a three-week leave from work after being summoned by the Eswatini civil service commission to answer to the fraud charges.

She, however, did not report back to work when her leave lapsed. South African police, through Interpol, are looking for Andrew Ndlovu (31), who also uses the alias Andrea Druza, from Gweru to answer to allegations of house breaking and murder. Xolani Dube (26) and Tumelo Moyo (27) are wanted in Botswana to answer to charges of escaping from lawful custody. Police are also looking for Travor Manata (42) from Hwedza who is wanted for allegedly committing murder.