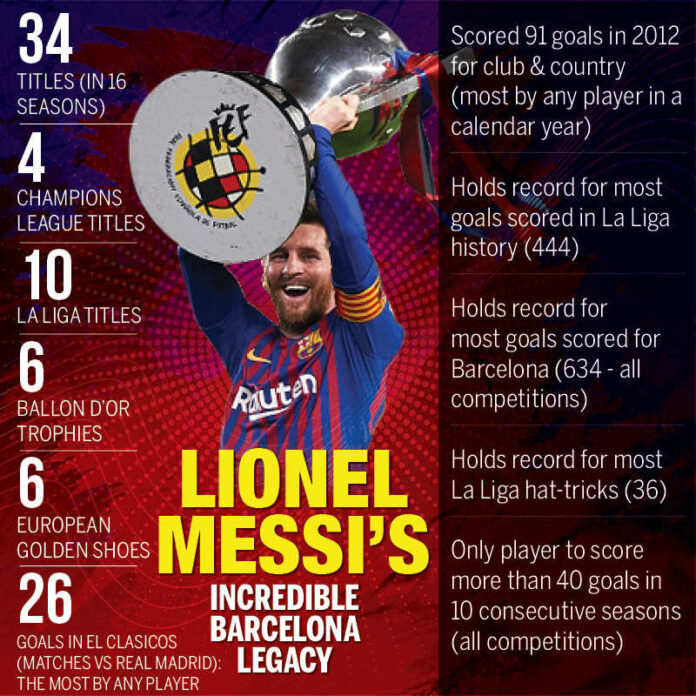 Barcelona have announced that record scorer Lionel Messi’s career with the club is over.

A deal had been agreed for the Argentina star to finish his career with the club where he has scored 672 goals in 778 appearances since his debut in 2004, but their financial situation meant the contract could not be signed.

Here, we take a statistical look at Messi’s impact on the club.

Messi’s goal tally for Barca is the most ever by a player for one club, after he passed Pele’s record of 643 for Santos last season.

He is comfortably LaLiga’s record goalscorer with 474 and is also second all-time in the Champions League with 120 to his great rival Cristiano Ronaldo’s 134.

Last season’s 30 goals won him an eighth Pichichi trophy, awarded to LaLiga’s top scorer, while he has led the Champions League goal charts six times including 2014-15 when he shared the honour with Ronaldo and Neymar.

Messi won 34 major trophies with Barca, when including domestic and European super cups and the Club World Cup in that definition.

They won LaLiga in 10 of his 17 seasons in the first team, with seven Copa del Rey triumphs – including last season – and four domestic doubles along the way. Seven Supercopa wins boost Messi’s total to 24 honours in Spain – Barca won eight in that time, but he did not play in the two-leg 2005 win over Real Betis.

He added another 10 continental or inter-continental successes, with Barca winning the Champions League in 2006, 2009, 2011 and 2015 and adding both the Uefa Super Cup and Club World Cup after the latter three of those.

Messi scored 48 hat-tricks for Barca, including 36 in LaLiga, with another six for Argentina taking him through the half-century mark for his career as a whole.