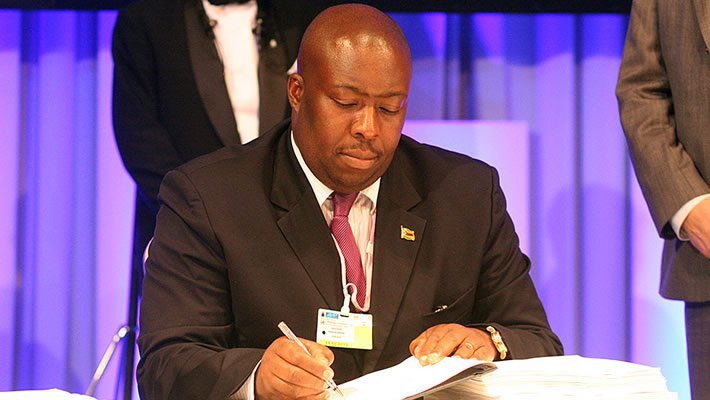 President Emmerson Mnangagwa says the High Court must not entertain an application challenging his rise to the leadership of Zanu PF because it will reverse the gains he is making as Zimbabwe’s leader.

Mnangagwa’s fears are revealed in opposing affidavit deposed on his behalf by Zanu PF secretary for administration Obert Mpofu, in a case where a ruling party member, Sybeth Musengenzi is challenging his succession of the late Robert Mugabe in the aftermath of the 2017 coup.

Kasukuwere, who was forced into exile during the coup, is now being touted in some Zanu PF circles as Mnangagwa’s potential replacement in light of intensifying factional wars in the ruling party.

Mpofu listed some of the reasons why the president believes he must not be removed from power through the court process.

“In this regard ,it is common cause that the government led by His Excellency the President ED Mnangagwa has undertaken reforms to the economy through the Transitional Stabilisation Programme (2018-2020) and now the National Development Strategy, which have stabilised the economy, brought inflation down from 837% in June 2020 to 55% presently; it has brought economic growth estimated by the government to be approximately 7,80/0 for 2020-2021, the highest level of growth in Africa and supported by figures from the International Monetary Fund and the World Bank,” Mpofu says in the affidavit filed on behalf of Mnangagwa.

“It cannot be sensible or convenient for this Honourable court to be invited to upset these national programmes, at the whim of some unknown figure, whose background and credentials are suspect and boarder on factional political interests as alluded to in the supporting affidavits from (Masimirembwa). “

It is the admission that Mnangagwa is a target of factional jostling in Zanu PF and the Kasukuwere dimension that has added intrigue into the case.

Masimirembwa said: “lt is believed, on investigation by the district coordinating committee security that reports to me as chairman of DCC 4 Harare and also acting chairman of the Harare Province, that Applicant was “planted” into the relevant district, without the relevant credentials for political and other reasons by the former secretary for the commissariat Saviour Kasukuwere, with whom he is allegedly related.”

Mnangagwa also wants the court to throw out the application because a sitting president cannot be tried.

Musengezi, who is represented by lawyer Nqobani Sithole, wants the High Court to declare the November 19, 2017 Zanu PF central committee meeting that confirmed Mnangagwa as acting party president “unlawful and null and void”.

He argued that Mugabe was not incapacitated to preside over a lawfully convened session of the central committee in terms of Article 7 Section 38 of the party’s constitution.

Zanu PF is said to be divided into two major factions backing either Mnangagwa or his deputy Constantino Chiwenga.

It is also believed that the remnants of a faction that was loyal to Mugabe, which was known as G40, where Kasukuwere belonged are still active.

Some Zanu PF sympathisers have been using social media to campaign for Kasukuwere to contest the 2023 elections as the ruling party’s presidential candidate in place of Mnangagwa.

This is despite the fact that Zanu PF’s annual conference last week endorsed Mnangagwa as its presidential election candidate.