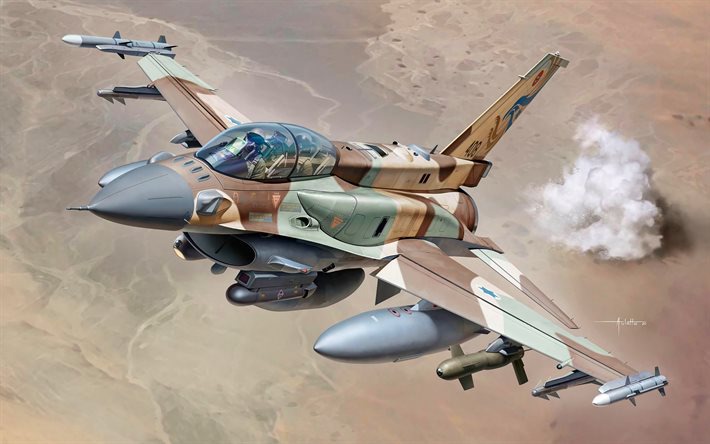 The F-16I “Sufa” (“Storm”) is a highly-localized twin-seat Israeli version of the classic General Dynamics (now Lockheed) F-16 “Fighting Falcon” lightweight multirole fighter. The design incorporates many unique features to make it largely Israeli and updates key aspects of the already proven fighter. The F-16I is, at its heart, a direct evolution of the F-16 “Block 52” offering.

The formal IAF requirement for such a fighter was born in September of 1997 and the F-16I design competed successfully against the service’s other option – more F-15I Ra’am long-range strike platforms. The definitive selection was made during July of 1999. From there, 102 total F-16Is were placed on an order by the IAF, resulting in a modified F-16 flying in prototype form on December 23rd, 2003. Deliveries to the Israeli air service began as soon as February of the following year.

The F-16I incorporates changes to its avionics, instrumentation, and weapons support (the APG-68(9) series radar fit in the nose and the Pratt & Whitney (PW) F100-PW-229 afterburning turbofan engine at the tail are both retained). About half of the existing aircraft’s avionics set has been replaced with a customized suite and a new, locally-developed, Helmet-Mounted Sight (HMS) was introduced.

Broadened weapon support for Israeli-made missiles, such as the Python 5 from Raphael, was also introduced during this design and development process. Beyond this, the airframe was modified to support conformal fuel tanks along either side of the dorsal line to improve operational ranges at the expense of additional weight.

The result is a more lethal target-hunting aerial platform suitable for use within the current attack-or-defend doctrine of the IAF. The F-16I fights alongside the F-15 “Eagle” air superiority/multirole marks (A, C, and I) to form an impressive “one-two” punch. The current (2019) IAF inventory includes as many as 175 F-16-related fighters (both C and I models) in addition to 66 of the aforementioned F-15 types. A dozen F-35I 5th generation stealth-centric strike fighters are also on call with some 38 more to follow, further bolstering the existing IAF fighter fleet.