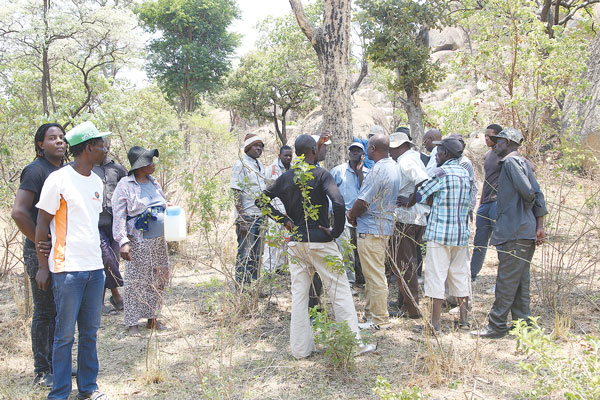 CHINESE mining company, Monaf Investments has given villagers in Muchesu ward 12, Binga, three months’ notice to vacate their ancestral land after it was granted a permit to extract coal in the area.

This is not the first group of Binga villagers to be ordered off their ancestral land to pave way for Chinese coal mining projects.

Last year, government flexed its muscles and ordered villagers in Dinde to relocate to allow for a similar project in their area after they had resisted.

“Due to economic challenges, they only did the exploration process, where sample holes were drilled in 2010 and they went back. Now under President Emmerson Mnangagwa’s vision 2030, they were given the greenlight to carry on with their investment and they came last year in October and resumed the project. They started by drilling a four-square metre hole which measures almost 64 metres deep and this is called a shaft,” he said.

“Then the eviction starts here. There are 14 homesteads on top of the coal belt, but not under the same village head. Some are under Siamulamfu, others under Ncheme 1, some under Siabutale. The meeting was held last week on Thursday January 12, 2022 in the presence of the Monaf Investments, ZimParks [Zimbabwe Parks and Wildlife Management Authority], district development co-ordinator, council, the President’s Office, EMA [Environmental Management Authority] and Ministry of Health representatives.”

Mudimba said the main agenda was preparation for resettlement of those affected and they were given a three-month notice to leave the area.

“All this will be done under Phase 1, but Phase 2 will be in two to five years’ time, we will see almost half of the ward being evicted, mostly Zuka village, and this village has two schools. The purpose is to build a power plant and other projects on the site, according to Monaf,” he said.

Mudimba said villagers were not happy with the evictions although the company promised to create jobs for the youth in the area.

“Each village head in the affected area has been given a period to go and look for a good resettlement site where houses will be built for the affected people, boreholes will be drilled and installed. This was a promise from the company. Good sanitation will be a task of the health sector,” he said.

“There are divisions among the villagers. Some wanted to resist the project, but since unemployment is a major economic challenge, almost half are in support of the project.”

A villager from Muchesu said Monaf was just making empty promises so that they could leave the area.

“We have seen a lot of people suffering as a result of these resettlements. It is impossible that this company will build houses for us or create jobs here. We are just going to suffer. It’s hard to leave our land. Things are not being done according to our will. Government does what it desires with our land,” said Simoni Mudenda.

Local councillor Mathias Mwinde confirmed the development, adding that they were holding a meeting to discuss the issue.

“Some arrangements are being made to resettle villagers. We are expecting to hold a meeting and discuss the concerns of the villagers because they are not really happy about being moved,” he said.