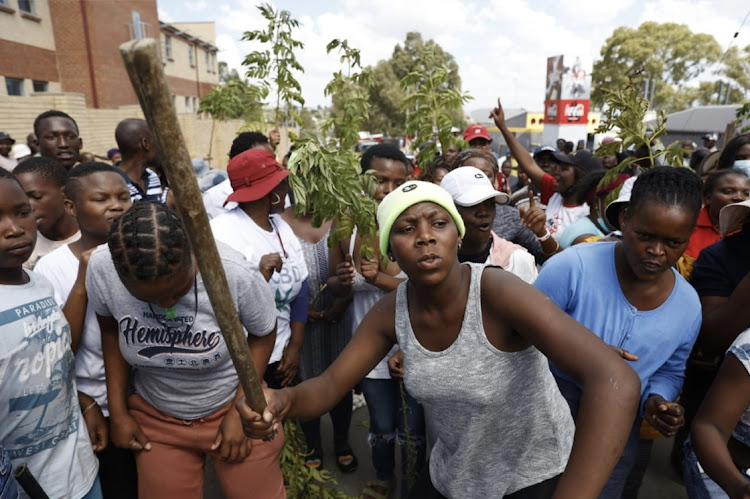 In the dead of night, heavily armed members of the police’s tactical response teams and public order police combed through the tightly knit shacks in Diepsloot, trying to keep the peace after a series of killings and protests. Despite this, before the sun rose on Thursday, gardener Mbhodazwe Nyathi’s body was sprawled on Thubelihle Street, metres from his home. He had been killed the night before, allegedly by a mob.

Additional police were deployed to the area on Wednesday after several people were killed at the weekend, which led to mass protests. According to his family, the Zimbabwean national and father of four had just come home from work when a mob ran through his neighbourhood chasing a group of people, knocking on doors and asking for ID documents.

“My brother, his wife and others hid behind their shack and the group found them and started chasing them because they thought they were criminals,” said Nyathi’s brother Godknows. Nyathi was allegedly caught by the group who tied him up, assaulted him and set him on fire.

“We are hurt because my brother was not a criminal. I spoke to him yesterday when he was at work and after work, he came back home to Diepsloot and they killed him. My brother was a good person. He had a wife and four children,” said Godknows. On Thursday, community members watched on sombrely as Nyathi’s family cleaned his blood off the street and retrieved pieces of his clothing from the burnt rubble.

“All I can say to the community of Diepsloot is if they catch someone they need to investigate if this person is a criminal or not. They can’t just catch someone and kill them because they will only find out at the end that this person was not a criminal and was innocent,” he said.

Police spokesperson, Brigadier Brenda Muridili, had earlier told News24 that the mob had gone door to door at around 21:00 on Wednesday and demanded passports from foreigners. When they entered one home, a man fled the scene, was chased down and killed, she said. Residents said they could not speak to News24 as they were afraid for their lives. One woman, who did not want to be named, said she hid under her bed with earphones as the chaos erupted.

The silence is too loud from both the government and the opposition parties who are notoriously known for asking fo donations and encourage the Zimbabweans in diaspora to send remittances home. Not even a single tweet , statement or even condolences to the immediate affected families and those who remains in danger.

More killings are coming no doubt , this is always the end for vigilante groups like operation Dudula who blame everything on foreign nationals including crime , lack of service delivery , unemployment and many social ills affecting South Africa

In any normal country the Zimbabwean Embassy would have issued a statement warming the citizens to be careful around those hotspots where violence happened yesterday even evacuation for those who are stranded.