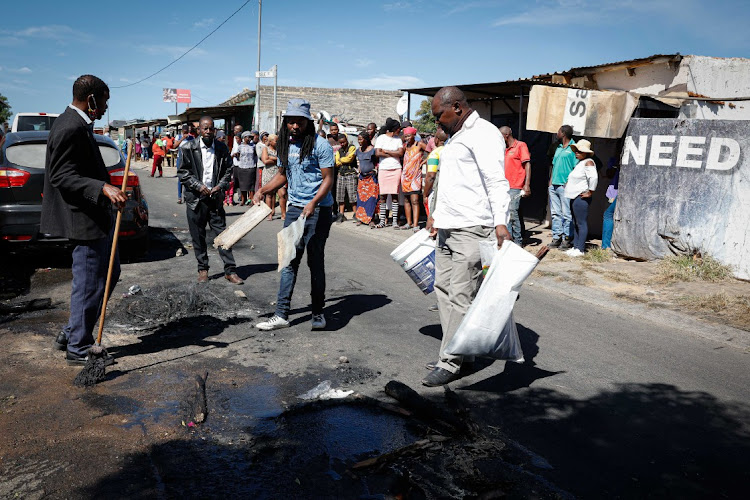 “Go diragalang? [what’s happening?]” are the two words that saved a Zimbabwean man from being killed by a mob raiding homes of suspected illegal immigrants in Diepsloot on Wednesday night.

The man, in his mid-40s, whose name cannot be revealed for fear of victimisation, said he heard people shouting “passport or ID in hand” and banging on shacks at about 10pm. He left his shack to avoid them knocking on his door.

“After picking up my Pedi accent, they asked me to join them their raids. I did so because I was petrified. They were a group of about 50 men armed with pangas, axes and golf clubs. I was totally not aware of what was going to happen,” he said.

He said he learnt Pedi in Diepsloot.

The group spotted the man’s neighbour, Elvis Nyathi, running away from his shack and caught up with him and began beating him with a golf club, he said. They then took him to a nearby street where they set him alight.

“I tried to ask them not to assault him but they wouldn’t listen. Then I realised if I persist pleading for his life, they may realise I have a relationship with him, so I stopped,” he said.

He had been friends with Nyathi for six years.

“They set him on fire. I do not think he was alive then. While we were there, the tactical response team unit came and dispersed the mob. It was the most painful experience I have ever had in my life, seeing an honest man killed like a criminal.”

Diepsloot has seen a wave of protests this week as residents complained about high levels of crime, which they blamed on undocumented migrants.

The construction worker, who has been in SA since 1991, said the country had become his home and he is baffled by what is happening in the area.

“They should allow police to arrest criminals. Not what they are doing now because we are living in fear,” he said.

The trauma of witnessing his countryman die before his eyes forced him to stay home on Thursday and not go to work.

“There is someone in our space who is giving information to these people about which homes to raid. They only targeted specific homes and left others. That is what makes me uncomfortable even speaking to you because I do not know who is watching us.”

Nyathi, 43, was killed on Wednesday night after he had hidden behind his shack.

His brother Godknows said his brother was in a panic when he ran. He said when they caught up with Elvis, they brought him back to his shack and searched for a firearm and could not find it. Nyathi’s neighbours were also raided for passports.

Police minister Bheki Cele visited the area on Wednesday and committed to provide 16 vehicles for patrols and additional detectives to investigate 11 murders that took place late last year. He also left behind a team of amaberete (tactical response team) members, who could not save Nyathi.

On Thursday, Cele returned to the spot where Nyathi was killed and conceded the police were late in responding to the incident.

“Police were here last night, they came late on this. We have to check what happened, why they delayed but to say we did not respond, that is not correct,” Cele said.

Another Diepsloot resident, whose name Sowetan has withheld to protect him, said he saw the warning signs about the raids on Wednesday when some members of the community said they would search for people without SA IDs at night.

On Wednesday night he decided to sleep with his clothes on. He said the mob knocked on his door but left when they realised they knew him. They proceeded to the next shack where a  Mozambican man had accommodated his two brothers for the night for safety.

After opening his door, they were asked for their IDs.

“We told them the documents are not with us but at another shack. They slapped us and took our phones and my cash and left,” the Mozambican alleged.