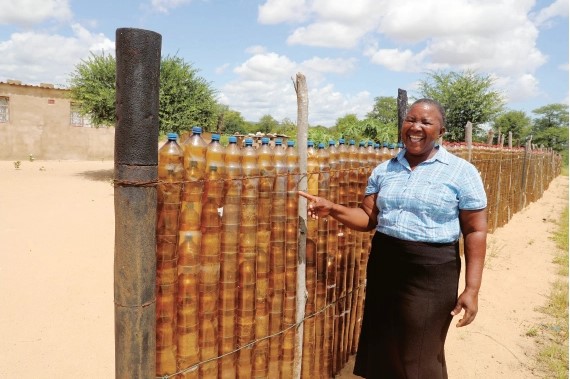 ONE kilometre from Siachilaba Business Centre in Binga District, Matabeleland North Province, is a couple that is revolutionising waste management in the rural areas and at the same time preserving the environment. At Saimwinde 2 Village in Siachilaba, Mrs Violet Mombe and her husband Misheck have fenced off their homestead with opaque beer plastic containers from Delta Beverages’ Super range, popularly known as Batai Munhu.

The imaginative way the ‘rubbish’ has been stacked up to make a picturesque fence is eye catching. Environmentalists are sure to salivate at the weather-proof fence that utilises plastic which if not disposed of properly, can pollute the earth for more than 500 years. Recently, the Mombe’s innovation got recognition during a National Cleanup campaign at the Business Centre for the ingenious way in which they manage the waste that is found strewn around places such as Siachilaba that have bottle stores and venues for leisure.

At these leisure spots especially in the rural areas, Super is the alcoholic beverage of choice
for the average villager and it is taken by the gallons. Thereafter, these plastic bottles are strewn all over the place, causing littering and environmental pollution. Globally, plastic has caused a waste crisis as it takes hundreds of years to decompose.

It also poses a huge threat to livestock and marine life as ingestion can be fatal. According to the United Nations Environment Programme, around the world, one million plastic bottles are purchased every minute and to date, about 400 million tonnes of plastic waste is produced every year.

What is worrying is that only 10 percent of this is being recycled and in Africa where recycling plants are few or sometimes do not exist there needs to be alternative ways to reuse and repurpose plastic. In rural areas such as Siachilaba, such inventiveness and interventions like Mrs Mombe and her husband’s fresh approach to plastic waste disposal have been encouraged. Woodlands are deteriorating at an alarming rate as trees are cut down to fence homesteads in rural areas.

The Mombe’s design is cheaper than buying actual fencing and may be a revolutionary way to save trees and dispose of plastic safely. A visit to the Mombe’s homestead revealed that the couple had fenced three quarters of their property. There were many plastic bottles, perhaps thousands, being readied to take their place in the fence.

Mrs Mombe said she collects the plastic bottles from the business centres around the area and the process of fencing was labour intensive as she started around September last year. “I saw value in the used plastic containers for making a boundary fence for my homestead. I would go to the Siachilaba Business Centre and collect these Batai Munhus and I collected about 10 000.

Eleven of them make a pole as I stack each of them onto each other. “The first plastic bottle, you don’t cut it but leave it like that, and the next one you cut it from the end and then do the same for the next bottles and you don’t cut the final one at the top of the pole.” “Thereafter you build your wall like that until you get to the height that you want. I started this project in September last year,” said Mrs Mombe. She said the plastic bottles are in short supply as some people are now using them to store homemade alcohol. “However, the challenge is that finishing up the project is a problem because the plastic bottles are now hard to come by.

Although I have collected some of them, there are people this side who use them to store seven days (home brewed alcohol),” said Mrs Mombe. She said the process was saving the environment as it lessens deforestation. “If I was using sticks to fence my homestead, it would have caused a lot of deforestation, This is because the plastic bottles cover a lot of space and are durable, because I think I will re-fence, after two to three years, depending on how they fare with the weather,” said Mrs Mombe.