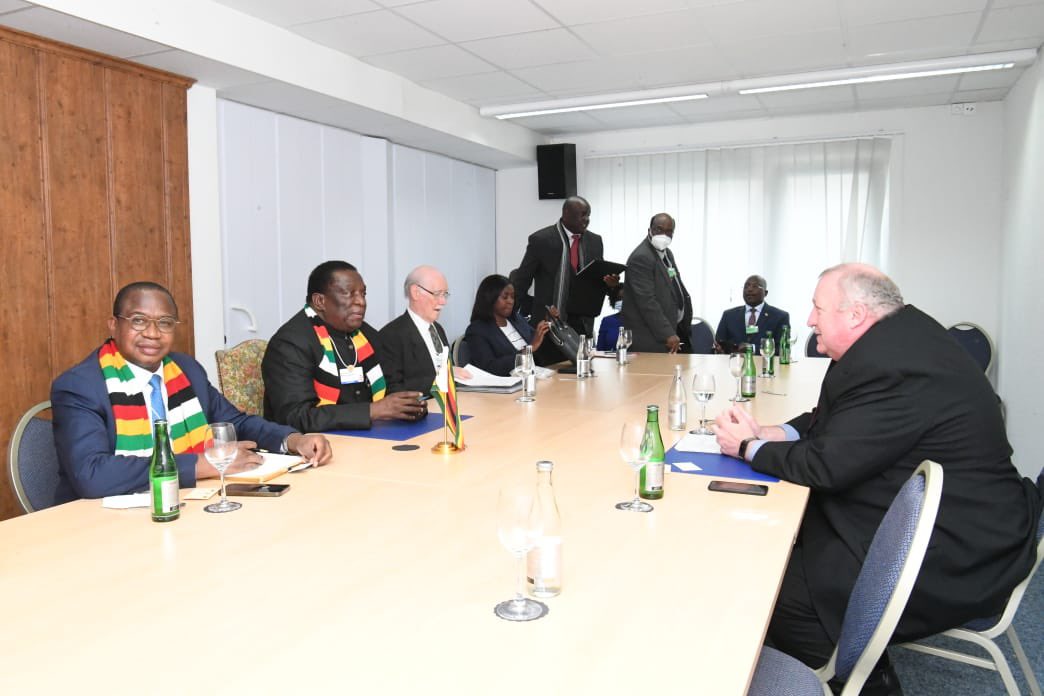 President Emmerson Mnangagwa on Tuesday co-chaired a breakfast meeting in Davos, Switzerland, on the sidelines of the ongoing World Economic Forum Summit where he is attempting to lure investors to Zimbabwe, which has registered insignificant foreign direct investment over the last few years.

Critics say his current trip to Davos is a waste of national resources. Mnangagwa co-chaired a breakfast meeting with Friends of African Continental Free Trade Area, Rwandan President Paul Kagame, Malawian leader Lazarus Chakera, and Hage Geingob of Namibia at a lavish event, which was part of some interactive sessions for African Heads of State and Governments, Chief Executives of Corporations and Heads of International Organizations.

Mnangagwa is in Switzerland for this Annual Forum until May 26th. He told the meeting that his government is open for business. “The future of business, development and wealth creation now depends on digital economy.” Industry Minister Sekai Nzenza, who is accompanying the president, says Zimbabwe is looking for foreign investors. “The president and government are doing everything to lure investors to Zimbabwe.”

Simba Mavaza, a Zanu PF program coordinator based in Britain, says Mnangagwa’s efforts to attract foreign domestic investment will have tangible results. “The president is coming back to Davos for the second time and his message is the same- Zimbabwe is Open for Business.” Independent economic commentator, Masimba Kuchera, is skeptical about Mnangagwa’s investment drive. “The World Economic Forum as the name suggests is a platform to talk but the outcome is different for every country depending on their global status and financial muscle.”

Business expert and chief executive of CEO Round Table Zimbabwe, Kipton Gundani, concurs. “Its good to go to these forums but we also need to fix our own policies at home and address the ease of doing business in the country.” In its 2021 investment climate statement on Zimbabwe, the United Sates noted that business entities are free to invest in most sectors, including mining, without any restrictions following the amendment of the Indigenization and Economic Empowerment Act, which required majority ownership by indigenous Zimbabweans.

In certain sectors, such as primary agriculture, transport services, and retail and wholesale trade including distribution, foreign investors may not own more than 35 percent equity. The U.S. further said that Zimbabwe has negotiated investment treaties with 35 countries, but it has ratified only 11, including those with the Netherlands, Kuwait, Denmark, China, Germany, Russia, South Africa, and Switzerland. Inspite of these agreements, the U.S. said the government has failed to protect investments undertaken by nationals from these countries, particularly with regard to land.

Despite these setbacks, some economists, including Prosper Chitambara of the Labour and Economic Development Research Institute of Zimbabwe say it is good for Zimbabwe to attend these forums, but more Importantly, to work on business policies promoting foreign and local investment. “The World Economic forum is a very important platform – so it is critical to be there as a government, but we should go beyond the forum and execute what the delegates bring back from Davos.” The cost of attending the World Economic Forum is pegged at US$19,000 per delegate for the 2022 event.

Meanwhile, the Zimbabwean government, whose airline has been banned to fly in Europe, is alleged to have hired a private Swiss Jet for its delegation at $30,000 per hour, suggesting that the cost of this trip could easily spill into a million dollars. But Mavaza says the cost of the Davos trip is nothing compared to the gains expected from the summit. “The amount of money the president and his team spent to travel to Davos and back to Zimbabwe can never be more than the value of the outcome of this trip.”

President Mnangagwa is also accompanied by his wife, Auxillia, Finance Minister Mthuli Ncube, Foreign Affairs Minister Frederick Shava, several government technocrats and state security agents. The theme of this year’s World Economic Forum is: History at a Turning Point: Government Policies and Business Strategies. More than 2,500 people are attending the event, which is highlighting issues like the Russia/Ukraine war, global warming and escalating prices of fuel.