PUNCHSTARWE CHOOSE TO GO THERE
Home Citizen Letters How CCC Lost the Masvingo Rural Ward 21 By Election on Saturday:... 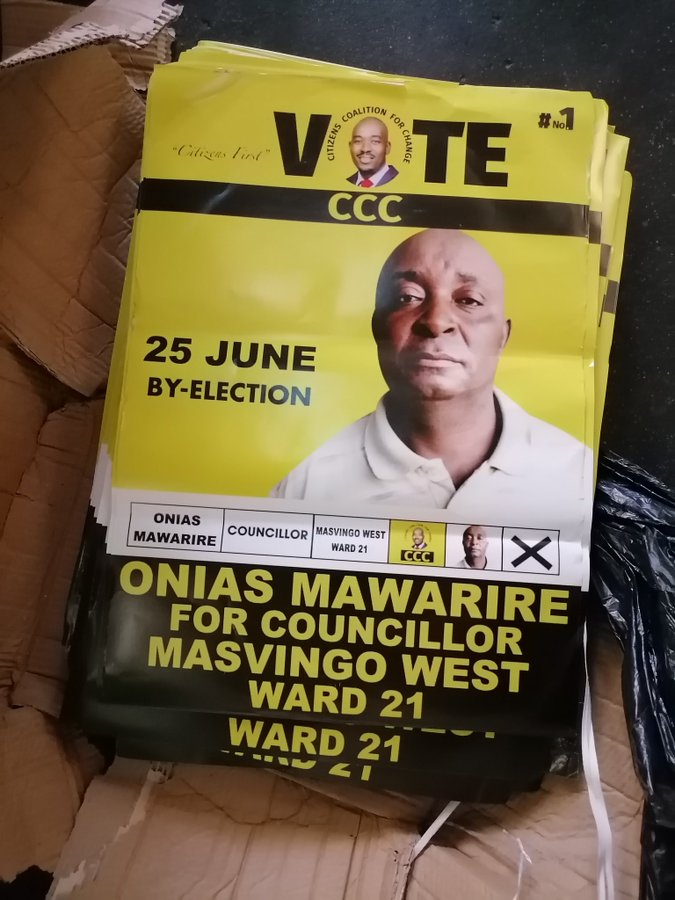 A local CCC supporter gave us his take of what went wrong in Masvingo Rural Ward 21 by elections over the weekend. The election in ward 21 was no meaner task because it was a litmus test of rural agenda , specifically , a resettlement area , a ward with plots, over 400 purchase farms, few professionals, 3 villages.

The geographical distance of the ward covers from Bhati and is near the boundary of Masvingo Central near near Muchakata with MUKORSI POLLING STATION & NYAMAFUFU. It is not possible to campaign in that ward on foot of using fan cargos, or Honda fit but off road. This means the cost of covering the ward is high.

With all this in mind, the coming of the ZANUPF Vice President Mohadi Kembo did a lot damage with respect 2 this ward. The village heads, Plot chairs, Headmen were tasked to make sure no person would vote for CCC in the ward.

People went thru a month of hell as they were frog marched to attend Village meetings & branches everyday. Assurance was supposed to b made so that each polling station would not record more than 10 votes. With freebies & goodies at stake, it was hell.

People were forced to surrender exercise books we gave them during our visits at Nyamafufu and Mukorsi Polling Stations. People braved the unforeseen and did not give up. We are grateful 2 those who didn’t auction principles at the alter of Political Expedience.

A borehole was drilled at Gwira Polling station on 23/06/22. All the local people were told that if they associate with @CCCMasvingo candidate Mawarire O, they will not benefit from the water project. This is despite the fact that @ZANUPF_Official used state resources.

The @ZANUPF_Official candidate was ferrying people with respect 2 Mushawasha Polling Station to vote. We had over 7 cars in the ward but by respecting the Electoral Act , we allowed people 2 come on their own. These transported voters were assisted.

At Mushawasha, the @ZANUPF_Official branded car was stationed the whole day at the gate leading to the polling station. This follows the address that was done on Thursday that every voter will b closely watched and if any polling betray them, violence would brew. The Ngomahuru Polling station defied odds by standing with the people. The % votes attained juxtaposed to 2018 shows an increase on the opposition. This is despite the fact that rural electorate were used to the #MDC name & it was the first time going to polls with CCC.

A lot of lessons were learnt. This borders from the essence of community based candidate, inclusion of citizens in selection process, due and diligence consultation. 2 polling stations were used as a sample 4 the 2023 strategy & it worked. Voter apathy was high. Young voters left the ward in search of greener pastures. Some workers transferred from the ward. Some died. New voters were not allowed to vote as per electoral guideline. To us, we managed to server well in rejuvenation of our members.

The myopic and naïve view that without structures work would not b done was founding wanting. Our Change Champions led by Masvingo District Deployees together with our hardworking ward coordinator strategically launched the offensive with few resources at stake. Preparation and the focus on the presidential support was well executed. The PSPPs & VPPs are now knowing the terms of reference to win Zimbabwe for change.

The hardworking and dedicated Champions who offered their vehicles, resources, remains the unsung heroes. Having these young dedicated cadres committing their time to the fight for the emancipation of our masses as volunteers is no meaner task. Mpumalanga District was at the rescue by granting all graphic posters pasted in the ward. Volunteers executed the task.

We are grateful 2 agents who braved the cold night at the polling stations defending the votes. We did manage to field 3 agents @ all 7 polling stations in the ward. When @ZECzim wanted 2 inflate 2 votes for @ZANUPF_Official , our parallel tabulation team was done. The vigilance shown by the team guarding their votes is a reflection of the readiness of the foot soldiers ahead of the 2023 plebiscite. At the fireplace at Command Centre, the Change Champions were there to witness due process to the end. Votes will be defended