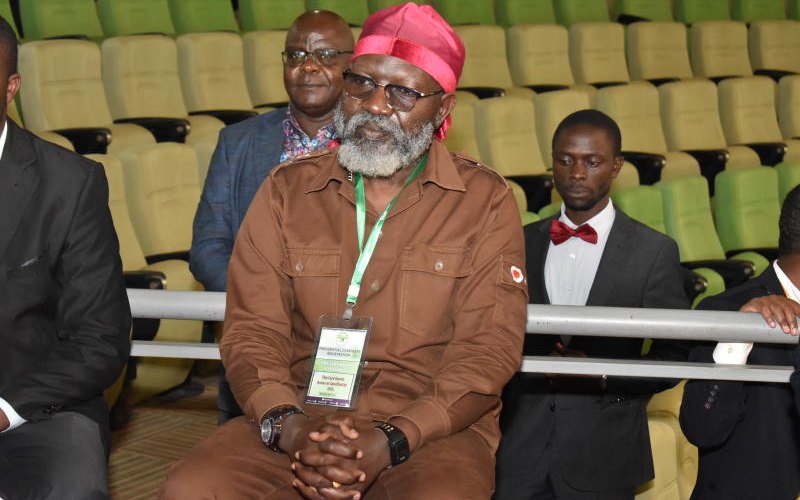 Kenyan Presidential Candidate, Prof. George Wajackoyah has promised to legalize the growing of marijuana to clear the country’s $71.4 billion debt burden. He plans to introduce snake farming and dog meat exports to China. He stated that his Government will hang corrupt people. George Wajackoyah’s manifesto launch on Thursday was more of a reggae concert than it was a customary exercise through which presidential candidates spell out their intentions for the nation every five years. The dais upon which Wajackoyah and his running mate Justina Wamae would dance before mingling with the rest at a makeshift dancefloor mirrored nothing of a stately set-up.

They had wooden seats in place of plush leather ones favored by the high and mighty and in place of the Kenyan flag, two wood lion sculptures flanked the pair. All this was intentional and part of Wajackoyah’s plan to project himself as a simple man Moving headlights flared yellow and red and green as reggae music blasted from every corner of a Kenyatta International Convention Centre auditorium, the venue of the event, whose invite stated would start at “4pm to late.” There was more music than there were speeches and it seemed that had been the plan. Wajackoyah, donning jungle-green khaki fatigue, a durag on his head, was dressed appropriately. Ms Wamae opted for traditional Agikuyu attire.

And they jumped up and down longer than they spoke. Their supporters, many of whom wore dreadlocks, bobbed their heads to the sound of Alpha Blondie’s Cocody Rock, of Bob Marley’s Iron Lion Zion, of Stanley and the Turbines’ Calypso on the Island and Marlon Asher’s Ganja Farmer. Israel Vibration’s Vultures played more than 10 times, and it was the song played to usher the Roots Party leader into the packed auditorium. A live band sang out “Wajackoyah” instead of ‘I ah oh ya’, the bridge in Vultures, making the song the obvious favorite. Perhaps the only downside was that those present could not have a puff of marijuana, the first item in Wajackoyah’s manifesto, still illegal in Kenya.

The only smoke that went up was of dust, thrust high by the vigorous stomping of feet from Wajackoyah’s supporters as they lost themselves to the reggae tunes. Police sniffer dogs had ensured that no one had carried bhang into the venue, not with Wajackoyah still a presidential candidate. The Rastafarian community was represented and would make a chant in endorsing Wajackoyah. Besides being a concert, the event was also a conference on legalising bhang, which the giant screens in the auditorium sold as ‘freedom’. “Freedom is coming,” the screens announced. “Freedom is bangi.” A screen mounted at the bottom center of the hall displayed a marijuana leaf symbol. And the speakers vouched for the need to legalize marijuana, terming the plant divine. Wajackoyah said that Kenya would become a “hemp country”, arguing that decriminalizing marijuana would end police harassment of people nabbed for possession.

“Police become judges, doctors and psychiatric experts, harassing people before the media without proving their guilt,” he said. He also stated that marijuana would lead to economic growth, which could help salvage the economy he said was in ruins and bankrupt. He also the clergy against condemning them for their stance on marijuana. “Those condemning us should first read our manifesto. They should call us to dialogue before condemning us. They have no right to condemn us for trying to heal,” Wajackoyah stated. He further promised to push for judicial reform to remove punitive laws.

The Roots Party leader also called upon his competitors to maintain political hygiene, alleging the employment of social media trolls to discredit him. Ms Wamae denied claims that she and Wajackoyah were projects. “Kenyans, you love us unconditionally and we cannot betray you. We will stick with you to the end,” Ms Wamae said, adding that they would place the youth at the heart of their agenda. Ms Wamae said that their candidacy would offer solutions to unemployment and easing the nation of its debt burden. “Let us water our grass in Kenya,” she said of a plan to free Kenya from donor funding, saying that legalizing and regularizing hemp was a top priority. “We went into research… the market price of industrial hemp is Sh159,000 per kilo.

Our job as the government would be to create wealth,” Wamae added, saying marijuana would create more farmers out of the youth, promising a Sh2.8 million grant for the youth as capital to plant marijuana. She also outlined how their government would make healthcare and food affordable. She would also say that the fact that she will share a ballot paper with her former MP, Raila Odinga, is humbling. Dr Gwada Ogot, a champion for the use of hemp, said that marijuana was the most profitable cash crop, industrially and medicinally. He highlighted the benefits of the crop, which he said could be used in the textile industry, making currency notes and manufacturing body oil.

While defending marijuana, Dr Ogot said that it enjoys divine endorsement, citing Bible verses such as Ezekiel 34:29. “I am at peace with nature and I have no problem with the green herb,” he said and sold its economic benefits. “If there is a time for a doctor, a teacher or anyone to have money in their pocket because they own half an acre then it is now.”