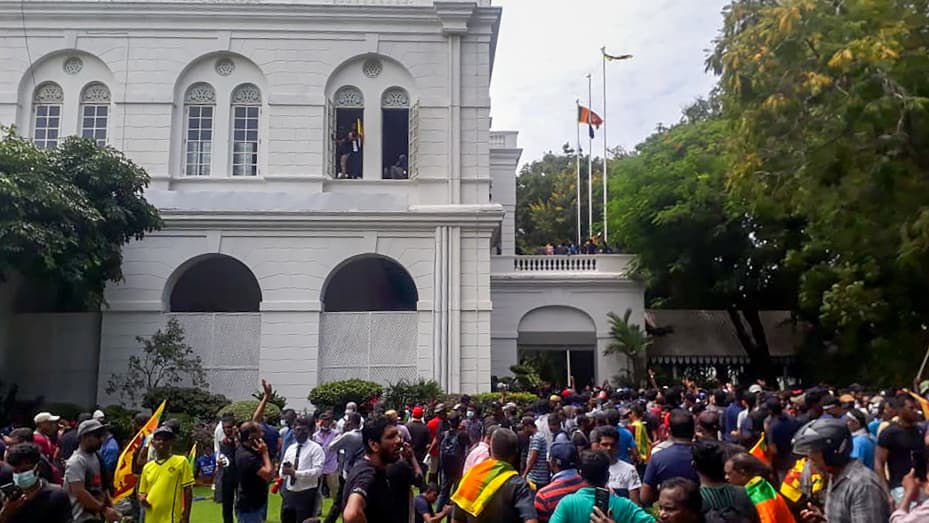 In one of the largest antigovernmental marches in the country this year, the protesters are demanding the resignation of President Gotabaya Rajapaksa. Thousands of people descended on the government district in Sri Lanka’s capital Colombo, shouting slogans against the president and dismantling several police barricades to reach his house. Police fired shots in the air but were unable to stop the angry crowd from surrounding the residence. At least 39 people including two police officers have now been hurt by the unrest, hospital sources said. Advertisement The president was moved from his official premises to a secure location as a safety precaution, according to two defense ministry sources, ahead of a planned rally at the weekend. Hundreds of flag-bearing protestors were seen packed inside the sea-front property and using the swimming pool on a Facebook livestream.

Prime Minister Ranil Wickremesinghe – who has also been moved to a secure location – summoned political party leaders for an emergency meeting in the wake of the violence. He has also requested parliament to be summoned by the speaker, a statement from his office said. US ambassador to Sri Lanka Julie Chung called on people to protest peacefully and for police to give demonstrators space – as she warned “chaos and force will not fix the economy”. Sri Lanka, which is home to 22 million people, is facing its worst economic crisis in seven decades, since it achieved independence in 1948. Inflation hit a record 54.6% in June and is expected to soar to 70%, piling pressure on the cash-strapped population. The country has been struggling under a severe foreign exchange shortage that has limited essential imports of fuel, food and medicine.

Many blame the decline on Mr. Rajapaksa, who has faced ongoing calls to resign. Protestor Sampath Perera, 37, criticized the president for “clinging on to power” and warned: “We will not stop until he listens to us.” Anger intensified in recent weeks as fuel shipments dwindled, leading to petrol and diesel being rationed for essential services. The British Foreign Office has warned against all but essential travel to the country, which has been left in financial turmoil due to economic mismanagement and the impact of the COVID pandemic. In April this year, Sri Lanka announced it was suspending repayment of foreign loans, blaming a foreign currency shortage.

It has accumulated debts of £42.4billion – of which around half, £23.3bn, must be repaid by the end of 2027. The crisis has severely dented the reputation of the Rajapaksa political dynasty, which has ruled Sri Lanka for most of the past two decades. One of Mr. Rajapaksa’s brothers resigned as prime minister last month, and two other brothers and a nephew quit their cabinet posts earlier, but Mr. Rajapaksa has held on to power. Mr. Wickremesinghe, who took over as prime minister in May, is also facing calls to quit for failing to plug the gaps in the country’s finances.