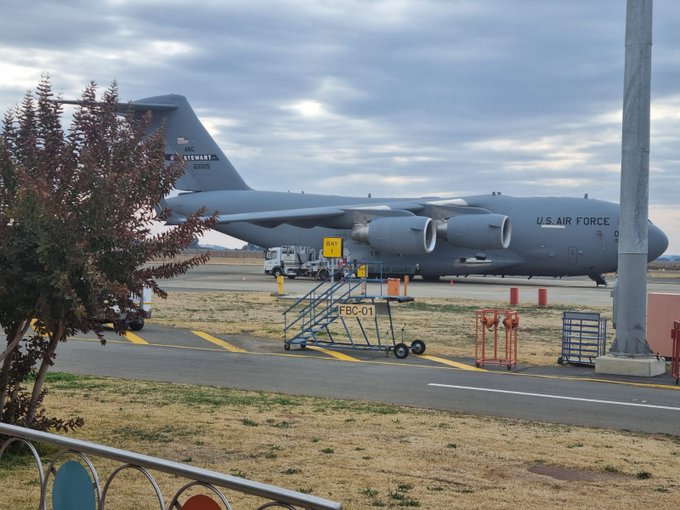 The resident of Bloemfontein were treated with a rare sight in their skies today as the C14 American transport plane cruise at lower altitude to land on Bloemfontein Airport. Some took to social media to query why the big American Air Forces plane has landed in their small commercial airport , so what’s going on ?

Around 700 military personnel – the bulk of 600 from the four SANDF services – are either deployed or preparing for deployment in KwaZulu-Natal and the Free State. The US contingent, according to DCC, is from the US Army Southern European Task Force, Africa and includes New York National Guard personnel. The 2022 edition of Shared Accord is the fourth, with previous iterations in 2011, 2013 and 2017. With the exception of the 2017 exercise at the SA Army Combat Training Centre (CTC) in the Northern Cape, the Eastern Cape hosted the other two, with a humanitarian and healthcare focus on rural, local communities.

A planned 2020 Shared Accord fell victim to the worldwide COVID-19 pandemic. The humanitarian component of this year’s Shared Accord has as its hub the Umhlathuze local municipality, which includes parts of Empangeni and Richards Bay. Eight clinics have been identified by military medics from both countries as sites where medical services will be available to local residents. These include ophthalmic and dental and are on offer from Tuesday (5 July) until 28 July when Shared Accord starts demobilizing and returning to units.

Shared Accord 2022 has several aims, one of which is to re-establish a “foundation” for regular similar bilateral exercises. Another aim, according to the DCC, is to conduct of joint inter-agency, inter-departmental and multi-national exercise planning processes between the SANDF and other state departments.