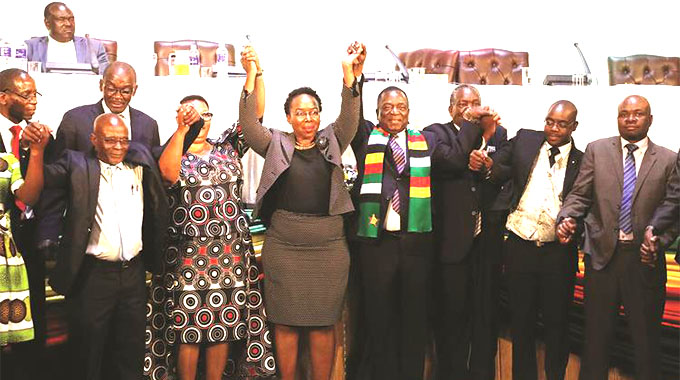 The Political Actors Dialogue (POLAD), a grouping of 16 political parties which took part in the 2018 elections, including Zanu PF, has released a declaration recommending electoral reforms before next year’s general elections.

Among the reforms, POLAD wants all election-related legislation to be consolidated in the Electoral Act; stop police from interfering with door-to-door campaigning and gatherings of 50 or fewer people and seeks to guarantee that assisted voters can only get help from a person of their choice who will be barred from assisting more than one person.

The reforms would also guarantee space for participating parties on state television and newspapers and reduce the time by which the Zimbabwe Electoral Commission (ZEC) should announce election results from five to three days.

The raft of recommendations would require legislative changes to take effect.

The declaration was signed in January but only publicly released on Wednesday. National Constitutional Assembly president Lovemore Madhuku, a member of POLAD, said the delay in releasing the document was because of President Emmerson Mnangagwa’s unavailability to give it his seal of approval. Patrick Chinamasa signed for Zanu PF.

“We had to send it to president first before making it public. From January to March we had the issue of the by-elections and we eventually submitted it in May,” Madhuku said.

“There was also a need for an internal committee in POLAD which I chair, on governance and the legislative agenda, to meet and understand the 16 issues of convergence. That meeting only took place last week in Kadoma.

“I understand the justice ministry is currently working on an Electoral Amendment Bill. As POLAD, we can only make recommendations, but we expect that since Zanu PF has signed, and the president has approved, there shouldn’t be any more hurdles,” Madhuku added.

Zimbabweans vote in general elections in the second half of next year. Opposition parties say the current framework of electoral laws favours Zanu PF, and where laws exist to guarantee a fair conduct of elections the ruling party has manipulated public institutions including ZEC and the police to frustrate their implementation.

“We want people to see that we have tried,” Madhuku said, referring to POLAD which was assailed as a Zanu PF talk shop by critics and boycotted by the main opposition Citizens Coalition for Change leader Nelson Chamisa.

The POLAD proposals include a change of law to say ZEC must announce election results within 72 hours (three days) from the present 120 hours (five days). That declaration was wrongly captured in the declaration as “96 hours”, which Madhuku blamed on a clerical error.

The clause however provides that ZEC can apply to a judge of the Electoral Court for an extension.

POLAD also addressed the controversial issue of the design of the ballot paper. In the 2018 elections, while listing the presidential candidates, ZEC created a two-column ballot paper and ensured that Mnangagwa’s name was top on the right side column.

“It is proposed that a provision be inserted in the Electoral Act prescribing that the ballot paper shall have a single continuous column of names of candidates in alphabetical order of surnames, whatever the length,” POLAD declared.

The declaration also proposes legal amendments to restrict police interference with political gatherings. It calls for “regulation of political campaign meetings” during the period from proclamations of elections up to polling day “to be kept to a bare minimum.”

Madhuku said he hoped parties that boycotted POLAD will buy into their efforts.

“The public must join us. Now that they have the declaration in front of them, they must stand up and say ‘you’re not implementing the agreement’. Why would Chamisa not take that whole 16-point document, add his 30 or 40 points, and say, ‘these are okay, but in addition let’s have this?’”