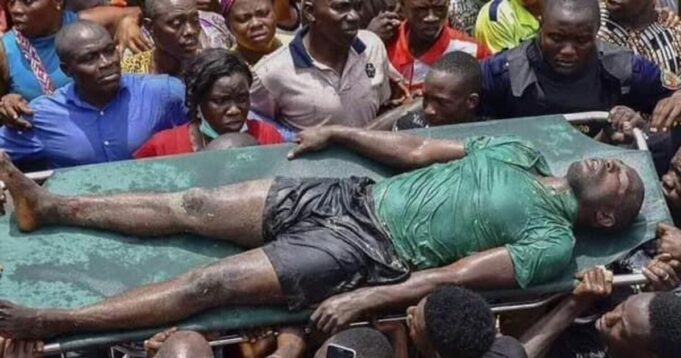 A Zambian man, identified as Martin Stampa, was left in shock and reportedly slumped after finding out that his wife is the owner of the house where they live. It was gathered that Stampa and his wife had lived in the house for 15 years and he was paying 3500 kwacha every month as rent. His wife would usually take the rent from him and send to the “landlord”. However, following an argument between them, the wife, identified as Lushomo, reportedly dropped the bombshell that she is the owner of the home they live in and he has been paying rent. She accosted her husband for engaging in extramarital affairs, and he reportedly admitted to his wife that he had gotten a side chick because he wanted someone who is intelligent and can engage in smart conversations.

This infuriated Lushomo, who then spilled the beans that he’s also not intelligent enough to know that he has been paying her monthly rent, as the house they live in belongs to her. On seeing the house’s title deeds, Martin lost consciousness and collapsed. In other news, two half-sisters enmeshed themselves in a messy drama on Twitter which made their family feud go viral on the platform. The quite controversial situation started when the elder sister, known on Twitter as @Sugaarrbaby, sent out a tweet about having two birth certificates because her father seized her original birth certificate as a way of punishing her mum and so her mother got another one.

The lady referred to her father as “my other parent” in her tweet. Moments later, her younger ‘half-sister’, a baker, replied the tweet and accused her elder half-sister of “dragging” their dad. She revealed their father wants nothing to do with Sugaarrbaby and her mum and also said some foul things their father allegedly said about the both of them. The younger sister added: “This is why they said marry one wife so your days will be long.” “I regret ever knowing you as a sister. God forbid,” the younger sister shared in a tweet as well.