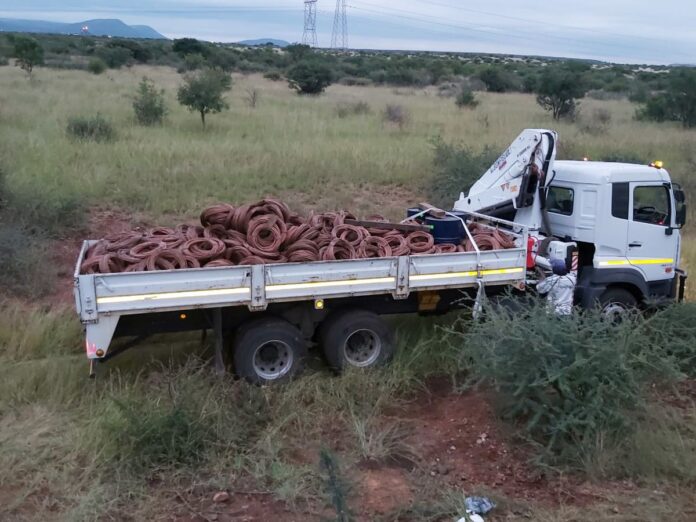 Five Zimbabweans and a South African national were Friday arrested by police at the Beitbridge Border Post while trying to smuggle copper cables valued at US$33,860.00 into the neighbouring country.

The suspects had stashed the loot in a South African registered minibus trailer and were busted while trying to cross into South Africa.

In a memo, police named the suspects as Siyabonga Ntombela, 32, a male South African who lives in Johannesburg; Gift Ndlovu, 25, of Bubi; Emmanuel Mdlongwa, 30; Aleck Maseko, 28; Proud Mkwebu, 24; and Nomathamsanqa Ncube, 38, all from Bulawayo.

The arrest of the group follows a blitz currently being carried out by the Zimbabwe Electricity Supply Authority (ZESA)’s Loss Control Department in collaboration with the Zimbabwe Republic Police aimed at combating rampant cases of theft and vandalism on power generating infrastructure.

According to ZESA General Manager George Manyaya, the crack team has received a lot of support from members of the public who have volunteered valuable tip-offs towards accounting for the culprits.

Part of the smugglers’ modus operandi has been the use of coffin carriers drawn by South African registered minibuses that often criss-cross the busy border post to deliver bodies of Zimbabweans who would have passed on in the neighbouring country.

Luck ran out of the six Friday when some alert officials carried out a search on the carrier to find the loot.

In an interview with ZimLive Saturday, Manyaya commended the public for assisting with tip-offs that have led to some arrests of vandals recently.

“We would like to thank the law enforcement agents and the public for working hand in glove with us in this operation,” Manyaya said.

“We continue to urge the public to report all cases for vandalism which are costing the country economically and socially.

“Vandalised equipment and infrastructure has to be replaced and yet that money should ordinarily be used for other expansion projects by ZESA.

“Citizens are also spending a lot of time without electricity as a result of thefts and vandalism.

“We want to urge all would-be offenders and offenders that the law is catching up with them and we will leave no stone unturned in this initiative.”

The power utility is reportedly losing over US$9 million annually due to vandalism and theft of its infrastructure.

ZESA recently adopted drone technology as part of its measures to curb the illegal practice.