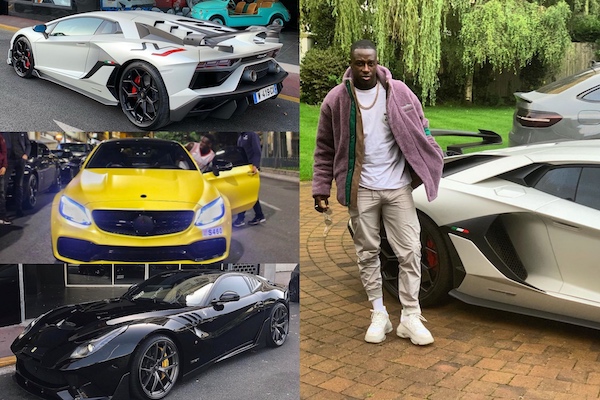 Manchester City footballer Benjamin Mendy raped three women in the same night following a pool party at his mansion and a subsequent nightclub trip, a court has heard. The 28-year-old is accused of raping three women after the party at his Grand Designs-style home in Cheshire, and the trip to China White nightclub in Manchester on July 23-24 last year. At Chester Crown Court on Monday, prosecutor Timothy Cray QC told jurors on the night of July 23 and the early morning of July 24, Mendy raped a 22-year-old and two 19-year-old women. His co-accused, Louis Saha Matturie, 40, is also accused of raping one of the 19-year-olds, as well as another 22-year-old woman in the same period. Mr Cray said this took place after lockdown restrictions were lifted and the new Premier League season was getting under way. Both men are said to have treated women with ‘callous indifference’ and assumed any ‘who heard the gates (of Mendy’s home) close behind her’ was ‘available for sex’. It is alleged during Mendy’s pool party, Saha asked one woman to drive to a local shop with him.

On the way back he tried to kiss her and took hold of her bare legs, the jury were told. A woman, aged 22, who worked at a nightclub in Manchester, was also at the pool party, invited by Saha in return for money – an attempt to ‘procure’ her as a potential victim, it is alleged. Mendy invited her to the cinema room in the house. She agreed, but was uneasy and asked her friend to ‘come look for her’ if she did not return in five to ten minutes. The 22-year-old did not want sex but he ‘persisted in his demands’ until she gave in and he raped her, the court heard. Jurors were told the other girl did come looking for her – but found two of Mendy’s associates blocking her way. After the pool party, Mendy, Saha and others went to China White nightclub in Manchester. Two women, both 19, who had been to the pool party, returned to Mendy’s house after the club, where both were raped, it is alleged. One was drunk and she remembered being in the swimming pool. Her next recollection was being face down on a sofa in the living room with her arms being held behind her back.

Mendy was raping her from behind saying, ‘Don’t move, don’t move’, the court heard. Forensic examination of the teenager’s underwear later revealed she had also allegedly been raped by Saha, but she had no recollection of any intercourse. The second 19-year-old had also gone to bed only to wake up to find Mendy raping her, the court heard. The jury was told one complainant, who first met Mendy in Barcelona, ended up at his home after going into Manchester for food and drinks with the player and another man. Mr Cray said the woman had made it very clear that she was not interested in Mendy. He said: ‘The next day, she was having a shower when Mendy entered the bathroom and started to touch himself in front of her. ‘She told him to leave and tried to get a towel to cover herself up. ‘She also tried to get her underwear from her bag but Mendy took it from her, saying words like, ‘I just want to see you’.’

The prosecutor said the woman was unable to leave the bathroom and they ended up on the bed with the woman on Mendy’s lap. He said: ‘She tried to move but she was unable to get away from him.’ Mr Cray told the jury that key features of the alleged offences included the targeting of young women, explaining that some of the complainants were 17 and 18 at the time. He said these features included targeting ‘women who were so drunk almost to the extent that they had little or no memory of the incidents, or were asleep, or they were waking from sleep’. Mr Cray said other similar features included Mendy using an ‘intro line’ that he just wanted to see the victim naked and both defendants raping the same woman. Mendy denies eight counts of rape, one count of attempted rape and one count of sexual assault relating to seven women. Matturie, of Eccles, Salford, denies eight counts of rape and four counts of sexual assault relating to eight women. The opening of the case began with the prosecution declaring the trial involved ‘men who rape and sexually assault women, because they think they are powerful, and because they think they can get away with it’. Opening the case Mr Cray QC had told the jury: ‘The case is simple.

Actually, this case has little to do with football. It is another chapter in a very old story: men who rape and sexually assault women, because they think they are powerful, and because they think they can get away with it. ‘They knew very well what they were doing. They turned the pursuit of women for sex into a game. They were prepared to cross that line over and over again. That was the effect of their game. ‘To them these women were disposable things to be used for sex and thrown to one side. ‘Central to the case is Mendy’s home at the time. We say Mendy’s house is part and parcel of how the defendants gained control of the victims. ‘It’s a mansion. But more importantly, it was isolated, as so many of the victims thought. ‘On occasions when they got there, the victims had their phone taken from them. Some of the complainants were taken to rooms which were locked.’ Mr Cray told jurors that Saha, of Eccles, Salford, was Mendy’s friend and fixer, and one of his jobs was ‘to find young women and to create the situations where those young women could be raped and sexually assaulted’.

The prosecutor said Mendy was a ‘reasonably famous football player’ who ‘because of his wealth and status, others were prepared to help him to get what he wanted’. He added: ‘Our case is that the defendants’ pursuit of these 13 women turned them into predators, who were prepared to commit serious sexual offences.’ He said ‘the fact they would not take ‘no’ for an answer’ would be something the jurors will ‘hear time and time again’. The prosecutor said Mendy and Saha say in ‘broad terms’ that all the women consented to sex, willingly with only a couple of allegations where there is a denial that anything sexual happened. Timothy Cray added there are no ‘big disputes’ about times or places and the ‘what happened’ is not controversial. But a central question is whether the women consented to sex. Mr Cray added: ‘Ultimately, these cases are about where the line is drawn.

You will be able to weigh up whether, in each case, the defendants crossed those lines because this is central, readily understandable life experience – you will know where the truth is after having heard the women concerned, the challenges to them and the other evidence that is relevant to the allegations in the charges.’ Mr Cray said Mendy and Saha denied any wrongdoing and instead claimed the women had consented to sex, often ‘willingly and enthusiastically’. But the barrister said that the fact that the pair did not care if the women were in obvious distress, seriously intoxicated through alcohol, much younger than them or had simply gone to Mendy’s house to meet friends showed that their view of consent was ‘miles away’ from that of any reasonable person. ‘These defendants weren’t in some happy state of sexual ignorance, they knew very well what they were doing,’ Mr Cray added. ‘They turned the pursuit of women for sex into a game and if women got hurt or distressed – too bad.’

At lunchtime the jury was shown a walkthrough video of The Spinney mansion, complete with a swimming pool and Jaws-style mural and gym with paintings of Mendy and his name plastered all over the walls. Last week, the names of Raheem Sterling, Jack Grealish, Kyle Walker, Riyad Mahrez and John Stones, all either current or ex- Manchester City players, were read to jurors ahead of the trial. His Honour Judge Everett wanted to make sure no jurors had any personal connection to anyone who could be referred to during the trial, or be called as a witness. Judge Everett, who is Recorder of Chester, told the jury last week: ‘Maybe you have heard their names. Some of you will be aware of the fact Mr Mendy is a professional footballer who plays football for Manchester City.’ Both defendants are on bail and the trial is expected to last up to 15 weeks.

None of the women who have made the allegations involved can be identified and reporting restrictions apply ahead of the trial. Eight men and six women were sworn in to serve on the jury at Chester Crown Court on Monday, including two jurors who will be discharged after the opening of the case. Mendy has played for Manchester City since 2017, when he joined from Monaco for a reported £52 million. He was suspended by the club after being charged by police. Judge Everett also told the jury: ‘There are 22 counts or charges, if you are feeling overwhelmed by that I can assure you that you will be having a lot of assistance on how you will approach that. ‘Don’t feel daunted or overwhelmed by that. This trial could go through to November.’ The trial continues.