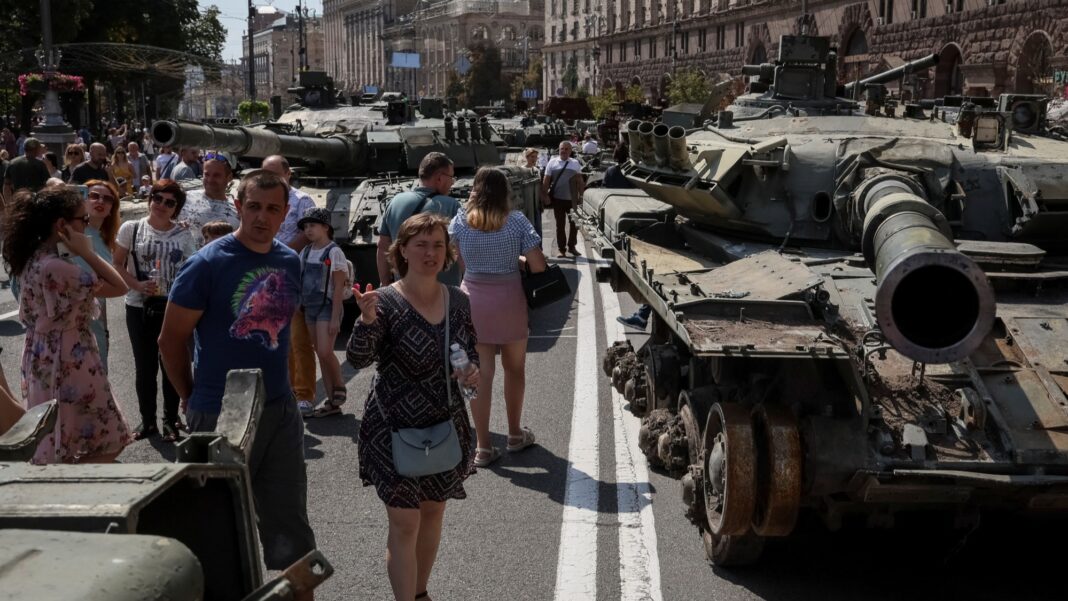 In late 2021, satellite images emerged showing the buildup of Russian troops on the snowy frontier with Ukraine. Since then, satellite imagery, maps and open-source intelligence (OSINT) have proved pivotal in documenting Russia’s invasion of Ukraine. The Russian war, which began six months ago on February 24, has turned into a battle of attrition. The Kremlin’s early aspirations for a swift takeover were stymied by tough Ukrainian resistance and what very quickly became a “people’s war” in Ukraine. In six months, Russia has seized more than a fifth of Ukrainian territory, with regions such as Luhansk now under its occupation. This report uses maps and satellite imagery to break down key events of the war.

Prior to February’s invasion, the Crimean peninsula on the Black Sea, annexed in 2014, was already under Russian control. In addition, areas in the eastern Donbas region were controlled by Russian-backed separatists. In 2013, then-Ukrainian President Victor Yanukovich halted talks with the European Union (EU) on trade and association, instead choosing to revive ties with Moscow. That triggered months of protests in Kyiv, which turned violent. A parliamentary vote was held in February 2014 to remove Yanukovich. In late February 2014, pro-Kremlin armed men began seizing buildings in Crimea and by March 2014, Russia had annexed Crimea. The following month, pro-Russian separatists in the Donbas region occupied buildings in Donetsk and Luhansk calling for independence. Fighting in eastern Ukraine between Russian-backed separatists and Ukrainian fighters continued.

The prelude to this year’s Russia-Ukraine war was set in motion when Moscow’s forces began building up along the border with Ukraine in 2021. By the end of the year, satellite images showed 100,000 Russian troops, along with tanks and military hardware, amassed on the frontier.

Despite diplomatic efforts in early 2022, tensions between Russia, Ukraine and NATO – the world’s most powerful military alliance – continued to reach new heights with NATO putting troops on standby. On February 21, Russia recognized the two breakaway regions in eastern Ukraine – Luhansk and Donetsk – as independent states and sent troops there for “peacekeeping operations”.

Day one of the invasion:

In the first weeks of the invasion, Russian troops pressed towards Ukraine’s largest cities including Kyiv, Kharkiv and Kherson, but they faced stiff resistance from Ukrainian forces. The city of Kherson, in the south, was the first key urban centre to fall on March 2, just one week after the invasion began. About the same time, in eastern Ukraine, Russian forces seized Europe’s largest nuclear power plant in Zaporizhzhia. On March 4, a fire broke out during the shelling of the power plant, raising fears of a nuclear disaster in Europe.

Despite some victories in the early days of the war, Russian forces were unable to gain control of Ukraine’s capital Kyiv, as they faced logistical challenges with ground forces unable to move fuel, munitions and material because of clogged roads. Satellite imagery showed a 40km (25 miles) Russian convoy stalled outside the capital.

Bucha, on the outskirts of Kyiv, became a strategic base for Russia’s attempt to advance towards the capital. However, after Russia’s withdrawal, residents of these cities returned home and witnesses gave accounts of alleged war crimes. Days after Russian forces left Bucha, Human Rights Watch (HRW) researchers visited the town and found extensive evidence indicating unlawful killings, torture, executions and forced disappearances – all of which point to war crimes. According to Richard Weir, a crisis and conflict researcher at HRW, “evidence indicates that Russian forces occupying Bucha showed contempt and disregard for civilian life and the most fundamental principles of the laws of war.”

Second phase of the war

After Russia’s failure to capture Kyiv and the withdrawal of troops in the north of Ukraine, Russia focused on the Donbas and a push towards Mariupol in the second phase of the war. In late April, the Kremlin published a set of aims with four main goals. According to the Russian Ministry of Defence, Russia’s military was to: 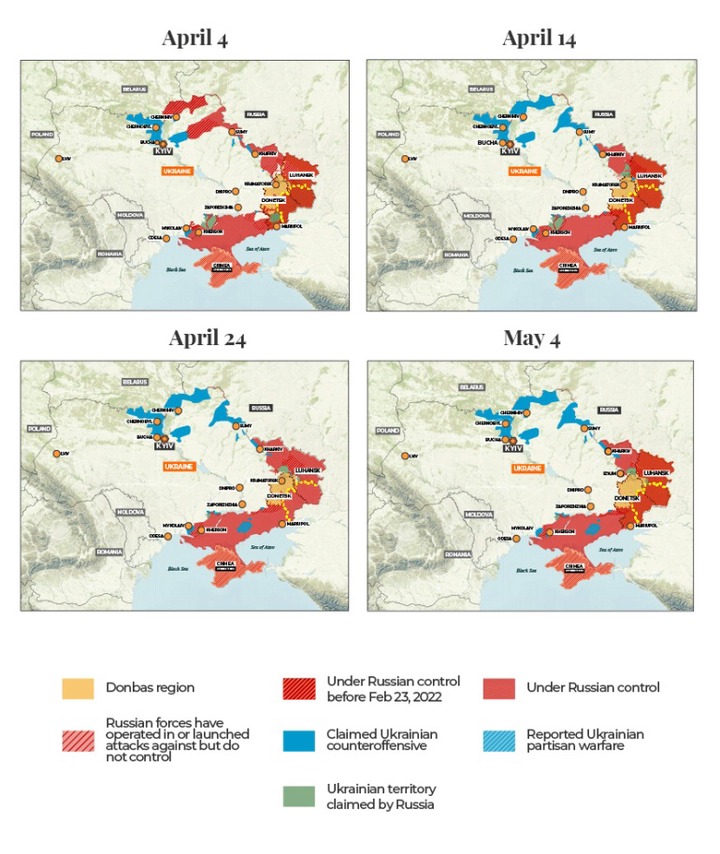 Siege and fall of Mariupol

Early on, Mariupol was subject to Russia’s relentless attacks but it also where Ukrainian tenacity was put on show. The port city was besieged in March, with multiple failed attempts to create humanitarian corridors amid incessant shelling. Mariupol endured some of the most intense fighting during the war, with a catalogue of attacks from the bombing of a maternity hospital on March 9 to an air raid on the Donetsk Regional Drama Theatre on March 16.

The Kremlin views the port city of Mariupol as a bridge to the Crimean Peninsula, which Russia annexed in 2014. Aside from establishing a land corridor, Mariupol was also a key part of Russia’s plans to put a stranglehold on Ukraine’s economy. The city’s port is a key export hub for Ukrainian corn, coal and steel. For months, grain exports were halted, until a Turkey and UN-brokered deal last month allowed shipments to flow again from Black Sea ports. The Azovstal steelworks, one of the largest metallurgical plants in Europe, had been at the center of fighting in April and May. The complex was used as a shelter by Ukrainian forces and civilians. According to Ukrainian authorities, there were 1,000 civilians hiding at the plant at one point.

Despite Russia’s reorientation of forces to the east of Ukraine, its offensive has appeared to gain little ground since May. A war of attrition has emerged as big territorial advances have become less frequent, despite Russian forces claiming victory over the city of Lysychansk and overtaking the Luhansk region in early July. Much of the fighting in recent months has been concentrated in eastern and southern pockets of Ukraine around Kharkiv, Severodonetsk and Izyum as well as Mykolaiv, Kherson and Zaporizhzhia, where fighting near a nuclear power plant has renewed fears of a possible disaster. Ukrainian forces have tried to take back territory in Kherson, while Russian forces have attempted to advance in Donetsk. Russia’s focus is now on the entirety of the Donetsk region in the Donbas, which along with Luhansk was recognised as independent earlier this year. Russian officials have stated that their forces are fighting for the complete liberation of the Donbas.

On August 9, a series of explosions rocked a Russian air base in the annexed Crimean Peninsula. The blasts killed one person and wounded 14 others, according to Crimea’s governor. Satellite imagery showed several warplanes were destroyed in the blasts, and the base sustained heavy damage.

Since the onset of the Russian invasion, one-third of Ukrainians have been forced from their homes. This has created one of the largest human displacement crises in the world. According to the UN refugee agency, UNHCR, there are more than 6.6 million refugees across Europe and some seven million internally displaced within Ukraine. The EU has granted Ukrainians the right to stay and work for up to three years in the 27-member state area. It is mostly women and children who have fled Ukraine, as men aged between 18 and 60 have been instructed to remain and fight. Since late February the UN has recorded 11.1 million border crossings leaving Ukraine and 4.7 million crossings returning back into the country. The map below shows where people have been fleeing.

Chamisa’ demands for electoral reforms are not SMART