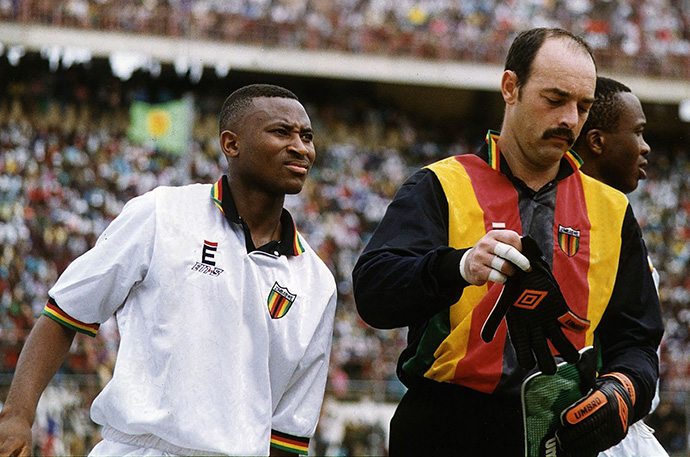 Masawi who is now be based in South Africa, watched his third game within a month on Sunday, the Bulawayo Chiefs versus Black Rhinos at Luveve Stadium.

He is a fitness instructor in South Africa, nicknamed Stango because he was very skilful and a Majuta Mpofu favourite at Eagles.

“l watched my third PSL game and from what l have seen the standard of football has gone down. I didn’t see that individual brilliance, someone who would carry the team on his shoulders and do the unexpected. There is no more flair or maybe we are emulating the European way of playing so much,” said Masawi.

He said this could be attributed to the state of the economy.

Masawi was part of the Eagles Under-14 side that won the Chibuku Trophy in 1987 alongside Collet Dube who played for the Young Warriors, Bulawayo City general manager Sikhumbuzo Ndebele, Ndodana Mhlophe and Cleopas Dlodlo.

He was part of the Highlanders FC squad of 1993 that won the league title.

With Mercedes Sibanda ever present at right back and blowing hot during the Dream Team era, Masawi was whisked away to Black Rhinos in 1994 when coach Roy Barreto left Highlanders.

“This could be due to the economic situation everyone is going through in the country. Now everything has to do with money unlike in the past we used to play for the love of the game,” said Masawi.

Masawi called on Zimbabweans to go back to basics. He said in the past, development started at grassroots with competitive junior leagues and youth club set up owned by the mines or local authorities.

“We used to have football pitches in almost every township but now most of them have been turned into housing stands and maize fields,” said Masawi.

The football legend said nowadays, football has to compete with modern technology as their recreational activities as opposed to back then when boys played soccer ezikwakweni (on bare, hard surfaces).

“Also back then, if for instance, there was a Premier Soccer League match at Barbourfields Stadium, supporters would start flocking into the stadium as early as 10am to watch Under-14, 16s, 18s and then the main-curtain raisers before the main match.

“It was easy to keep track of the promising talent because even supporters would know which players are due to be promoted to the next level,” said Masawi.

Meanwhile, following Week 26 round of premiership matches played weekend, Bulawayo Chiefs stayed 10th with the win on 36 points while Rhinos are comfortable on eighth with 38.

FC Platinum maintained their position at the top of the standings with a 2-0 victory over Manica Diamonds.

This took their tally to 55 points, six more than second placed Dynamos who edged Harare City 2-1 in a city derby, thanks to Ralph Kawondera and import Emmanuel Paga.