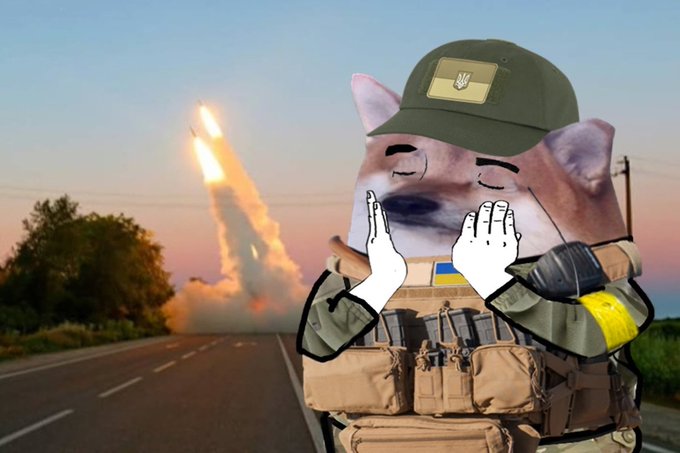 More than six months in, the war in Ukraine has become a little surreal. This past weekend, Ukraine’s Defense Ministry shared a doctored photograph of a Shiba Inu dog wearing a military uniform, apparently gushing over the site of a missile launch. “Today we want to give a shout-out to a unique entity,” the tweet read, before pointing to an unusually named group — the North Atlantic Fellas Organization. If you are the sort of person who gets your news from, say, a newspaper website, you may have little idea what NAFO is.

But if you’re the sort of person who has spent the last six months scouring Twitter for news about the war in Ukraine, signing up for obscure Telegram accounts and reading accounts of the latest Ukrainian strikes on Russia on blogs devoted to open-source intelligence (OSINT) … well, it’s quite likely you’re already a fella yourself. For the former, let’s explain. Over recent months, Ukraine-sympathetic internet users have come together to support Kyiv’s war effort. The Shiba Inu is a distinctive dog breed from Japan, which for over a decade, has been a recurrent motif in internet culture.

You may recognize it as a “doge,” beloved of Elon Musk and millions of other internet users. Vice’s Motherboard dates the use of Shiba Inu as a “fella” fighting the war in Ukraine to May, when an artist named Kama began creating custom images of the “fellas” for those who donated money to the Georgian Legion — a volunteer military unit in Ukraine that took on board many foreigners. “Out of boredom, I started making other Fellas and imprinting them on random images from Ukraine,”

Kama told Motherboard earlier this summer.
The movement went on to have a landmark moment in June, when Russian diplomat Mikhail Ulyanov got into an argument with a “fella” over threats to civilians. Ulyanov, Russia’s ambassador to international organizations in Vienna and a vocal advocate for Russia’s position on social media, made the mistake of responding to a NAFO member. “You pronounced this nonsense. Not Me.” would become a rallying cry for NAFO (if you hadn’t guessed, a play on the North Atlantic Treaty Organization).

It showed that the tables could be turned on Russia, when it came to trolling. The fellas soon found they had more and more supporters in the West — just recently, Rep. Adam Kinzinger (R-Ill.) joined the troll army. This has been a trollish war. That in itself is hardly a surprise. For years, Russia has used online tactics to spread division and create diversions. Most notorious perhaps were the St. Petersburg “troll farms” used in the run-up to the 2016 U.S. presidential election. It wasn’t always covert. The Twitter account of Russia’s Embassy in London became notorious for its meme-filled messages, often repurposed from Reddit, 4chan and other dark corners of the internet, designed to both rally support and ignite outrage.

It wasn’t always the most thoughtful stuff: What’s different about this time is that Russia isn’t the one in charge of the trolling. Russia has largely been stuck with the turgid ideological propaganda about Ukraine (a 7,000-word essay written by Russian President Vladimir Putin last summer was an early taste of just how horrifyingly sincere Moscow’s view of the conflict would be). Meanwhile, supporters of Ukraine have rallied around groups like NAFO, while pro-Ukrainian memes have flooded the internet. Ukrainian President Volodymyr Zelensky was quickly meme-ified.

An online language developed, from “Rashist” (a derogatory word that combines Russian, racist and fascist) to “Tractor Troops” (the Ukrainian farmers who towed abandoned Russian heavy machinery in the early days of the war). And the Ukrainian government has embraced it, using official websites to highlight memes and personally thanking those who spread them online. Official accounts have mocked not just Russian leaders and soldiers but its citizens, too. Footage of tourists fleeing Crimea after still-unexplained explosions last month was paired with a song by ’80s pop group Bananarama and the message: “Time to head home.”

NAFO, for example, have served as fundraisers for the Ukrainian military, even raising money so Ukraine would paint their memes on a tank, artfully dubbed “Super Bonker 9000.” Indirectly, the largely English-language memes have kept Western attention on Ukraine’s war — attention that is vital given the importance of Western arms to Ukrainian forces. The group has also undercut both Russia’s somber justifications for the war, as well as accounts from Russian state allies that had attempted to show the conflict going in a better light than it actually was. It’s noteworthy that many of NAFO’s supporters come from the OSINT community.

Eliot Higgins, the founder the best-known OSINT website BellingCat, tweeted this week that he would be talking about NAFO in a conference “as an example of online communities organically responding to disinformation from governments and counterfactual communities,” adding that it was “good for morale.” But there are risks to the tactic, too. The surreal nature of the memes shouldn’t mask the bloody reality on the ground nor become dehumanizing, as Soviet propaganda against Germany did during World War II, according to Shaw.

It’s notable that the Ukraine Defense Ministry has moved to embrace NAFO the same week that it banned reporters from traveling to parts of the country, sparking speculation that a counterattack is imminent. Is a counterattack actually happening? Ukraine’s response so far has been to not answer, but to do what it knows best: Troll the Russians, once again.