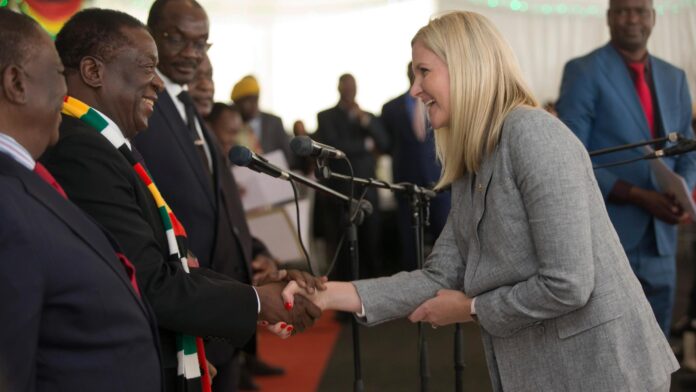 Sport minister Kirsty Coventry is surrounded by a cloud of suspicion over repeated manipulation of tender processes for the National Sports Stadium (NSS) upgrades, causing inordinate delays that have prolonged a CAF ban.

NSS was initially banned from hosting senior teams’ matches in 2020 but was provisionally cleared later in the same year. CAF imposed a final and still subsisting international matches ban in 2021 after authorities failed to bring the facility up to specification.

A procurement tender for the NSS upgrades was opened September 5 2020 but tender participants say they were taken from pillar to post for two years only to learn last week that Coventry had handpicked a South African company to oversee the upgrades, this outside of transparent tender processes.

Earlier this year, the Sport ministry re-advertised bid submission for a 24 June 2022 deadline before suspending it through a letter by ministry secretary Thokozile Chitepo indefinitely extending the deadline ostensibly due to ‘structural deficits’.

“A preliminary assessment indicated the necessity for possible adjustments to specifications due to the facility’s structural deficits which were deemed material to the installation (of bucket seats) process,” Chitepo said.

A structural engineer that spoke to Kukurigo Sport described Chitepo’s letter as bizarre, saying bucket seats had no relation to the structural integrity of the stadium.

In an explosive complaint to vice president Constantino Chiwenga, copied to the Procurement Regulatory Authority, one of the bidders, Longdew Investment, accuses the ministry of repeatedly shifting goalposts as “elements of corruption had eroded the tendering process”.

“On all three occasions, we raised issues of irregularities in the tender process that were at the root of a fair, transparent and competitive process…”

Longdew detailed how the Sport ministry had advertised for a market consultation for the stadium tender on 5 September 2020 before asking bidders to re-tender in a letter dated 27 November 2020.

Longdew raised objections over irregularities, including specification as consultancy instead of construction works, in a letter dated 8 December 2020.

The company received no response.

“The tender closed on 10 December 2020 but bidders were later advised the committee members did not turn up to make a full quorum. The process was postponed to 26 December 2020.”

“The date came and we converged again, but were also told that the committee was not able to sit for the opening. It was postponed for the third time to 31 December 2020.”

The committee then evaluated the bids on December 31 with bidders told to return on 1 January 2021 where results would be announced. Instead, the tender was re-advertised on 30 April 2021.

The ministry is alleged to have “relaxed submission of all mandatory samples” to accommodate bidders who had failed the original tender requirements and changed the evaluation criteria to ISO certification from previously advertised FIFA standards.

An addendum was allegedly issued “well after” the tender had closed in a bid to regularise the process.

Questions sent to Chitepo on Monday received no response.

However, Coventry told state media the ministry was now proceeding by way of direct procurement as suppliers had attempted to fleece government through inflated prices.

Coventry’s remarks on proceeding by way of direct procurement turned out to be false as her ministry opened the process for tender again, albeit with a raft of irregularities that were challenged by bidders.

Opposition LEAD leader Linda Masarira called on the Zimbabwe Anti Corruption Commission to investigate, saying there was no justification for Coventry to “handpick a South African company that did not even bid to win the tender while local companies are kept waiting after having wasted their time bidding? She’s disrespectful and must be called to order, and to explain why she did this.”

Masarira continued: “Two years have passed without any progress on NSS upgrades after Kirsty’s ministry repeatedly interfered with the tender process, cancelling it and extending dates to frustrate bidders.
Why? It does not take two years to award a tender.”

Zimbabwe is yet to feel the full brunt of the CAF stadium ban as the country is currently on a self-inflicted FIFA suspension due to government interference.