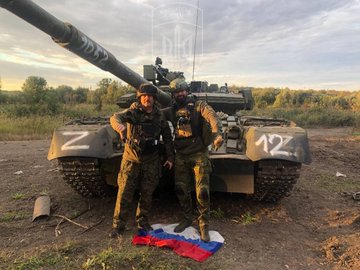 Ukraine consolidated its control of the Kharkiv region on Tuesday, raising flags on towns and villages occupied by Russian troops for six months, and reclaiming areas seized by Moscow on the first day of Vladimir Putin’s invasion. The state border service in Kyiv said it had liberated the city of Vovchansk, a couple of kilometers from the international border. Russian soldiers left on Sunday, it added, after the stunning Ukrainian counter-offensive. In the space of a few days Ukraine has pushed the Russians out from more than 6,000 sq km of territory, including zones in the south of the country where a separate counter-offensive is ongoing to recapture the city of Kherson.

Russian units have fled in disarray. Serhiy Hadai, the governor of the Luhansk region, said local partisans had raised the Ukrainian flag over the key town of Kreminna, which was “completely empty”. Its Russian occupiers had either left the area or were too scared to take it down, he suggested. Advertisement Russian battalions have fallen back to new positions east of the Oskil River, about 10 miles from the freshly liberated city of Izium. The city was almost entirely destroyed and more than 1,000 residents killed during five months of occupation and in recent fighting, Kyiv says.

Video confirmed the scale of the damage. It showed pulverized high-rise apartment blocs, trashed schools, blown up bridges, and burnt-out Russian military vehicles marked with the letter Z. The Kremlin used Izium as a garrison and arms depot in its operation to seize the Donbas. A western official said it was “too early to say” if Ukraine’s success in regaining 6,000 sq km of territory in the Kharkiv region represented “a turning point” in the six month-plus long war in a briefing, playing down the significance of Kyiv’s recapture of Izium and Kupiansk.

Nevertheless, the official acknowledged, it was “a moment that has power” and they confirmed that the amount of territory gained by Ukraine in the past week amounted to “half the size of Wales”. The official was speaking on condition of anonymity. Western officials praised Ukraine’s “innovative and experimental” military strategy compared with Russia’s, whose commanders were at times referring decisions to the Kremlin, slowing down the battlefield response. Advertisement “Moscow is operating with a long screwdriver,” the official added. The US said that it had helped Ukraine in wargaming potential counteroffensive strategies in the weeks running up to the attack in Kharkiv province.

Ukrainian commanders started opening up more to American and British intelligence officials and seeking advice, the New York Times reported. “We did do some modelling and some tabletop exercises,” Colin Kahl, the Pentagon’s policy chief, told the newspaper. “That set of exercises suggested that certain avenues for a counteroffensive were likely to be more successful than others. We provided that advice, and then the Ukrainians internalised that and made their own decision.” There were claims on Tuesday that Russian intelligence officers and military commanders had begun to evacuate from Crimea and to “urgently resettle their families”, in the wake of recent battlefield defeats.

Kyiv’s main intelligence directorate said employees working for the FSB – the spy agency Vladimir Putin used to run – have been quietly moving their relatives back to the territory of the Russian Federation. They have also been selling their flats, the directorate claims. Until recently the possibility Ukraine might take back Crimea had appeared remote. But a series of mysterious and devastating Ukrainian strikes over the summer on Russian aerodromes and weapons dumps, as well as the collapse of Russian forces in the Kharkiv region, has resulted in thousands of residents fleeing.

The claim is difficult to verify. But Crimea’s Moscow-appointed leader, Sergei Aksyonov, appears to be increasingly rattled. In a video address on Monday he threatened locals with prosecution if they listen to Ukrainian music or chant Ukrainian slogans. From Monday, anyone wanting to leave the peninsula via the Crimea Bridge will have to seek permission from an army conscription office, it has been reported. There is also a ban on house sales. Local pro-Kremlin TV stations, meanwhile, have sought to play down Russian losses.

According to the Institute for the Study of War, the Russian army has retreated from the right-hand (north/west) bank of the Dnieper River, practically abandoning a position outside the southern city of Kherson. Demoralised troops from the so-called Donetsk People’s Republic have also pulled out of the village of Kyselivka, leaving behind just four vehicles, it said. Kyselivka is strategically important for Russian forces and 15km north-west of Kherson. The Russian soldiers defending the city are effectively marooned after Ukraine destroyed all four bridges across the wide Dnieper River. The north-western outskirts of Kherson were now vulnerable to a Ukrainian counterattack, the ISW wrote.