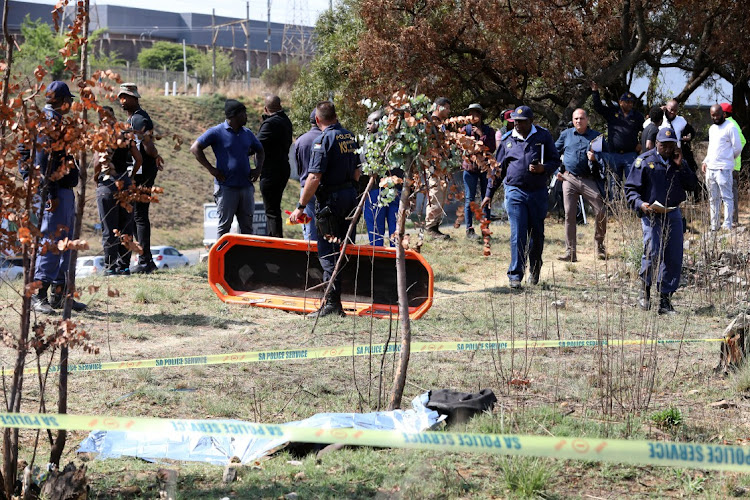 On Monday, a 25-year-old unemployed Zimbabwean man asked his neighbours for R100. He wanted the money to pay to get access to work as an illegal miner in one of the disused mining shafts along the N1 in Maraisburg. On Wednesday morning, his eldest brother wept as he identified his body in a veld not far from the mine. The young man was one of the six dead bodies discovered along the N1 by police in what is believed to be an ongoing war among illegal mining factions. Bosmont community patrol officer Farid Domingo said: “The bodies were hacked, stabbed and some shot as well. The situation has been going on for a long, long time. It’s a norm to hear gunshots in our area consistently, every single day.” According to the deceased’s brother, his sibling arrived in the country last November.

He said: He needed the R100 to pay to go underground. It was his first time going to the mine. He has been unemployed for a while. He said we can’t stay in a house together with no money and that’s why he decided to go there. And, with bad luck, now he is dead. The dead man worked as a security guard and was fired for sleeping while on duty. He recently worked at a local car wash in New Canada, where they live. According to the brother, his sibling wanted something that would bring in more money. He said he was not comfortable with him joining the zama zamas. “I thought he is a man, and as long as he is trying to make a living, it was fine.” The brothers are not being named because their family in Bulawayo has not been notified of the death.

The older brother said the crew, made up mainly of New Canada and Pennyville residents, went to the mine on Monday at sunset. “I was expecting they were going to come back in the morning. They did not come, and I was worried. I started asking around, and I was told there was a gunfight yesterday [Tuesday], and some people ran in the wrong direction and were shot. I started worrying.” One of the deceased man’s friends and a survivor said they spent most of Tuesday sleeping and resting after working all night in the shafts. He said gangs run by Basotho nationals hire them to work underground. He said about 100 men were working underground when shots rang out. The friend said: Me and him slept the whole day. Just as I started working at around 17:00, maybe after shovelling twice, that’s when the shooting started. I got out of the hole and ran. I think he ran in the wrong direction, and that is why he was shot and killed. He said he ran all the way home. “My friend is dead just like that. It is very painful.

I don’t even know what we are going to do. Most of the people who don’t know anything about these feuds and were just working were caught in the crossfire.” Another man in the area said his father-in-law also died in the gun battle. It was his third time going underground. “He left his job and wanted something else to do. Now, he is dead.” Gauteng police spokesperson Colonel Brenda Muridili said they were investigating six counts of murder. “We do not know what the motive is. We will be investigating several cases of murder. With the information we have received, these people who have died are suspected to be zama zamas.”

She added there were about 600 shafts across the province where illegal mining occurs, with most of them being in Johannesburg, on the West Rand and in Benoni. “We have specialised teams working to flatten and close the mines. As police, we were not able to do this alone. With the reinforcements, they are concentrating only on illegal mining, and police are dealing with policing.” While police are investigating, in his back-room shack in New Canada, the dead man’s brother is grappling with how he will break the news of the death to his family back home. “I don’t know where I am going to start. How am I going to tell my parents?” he said whilst crying.