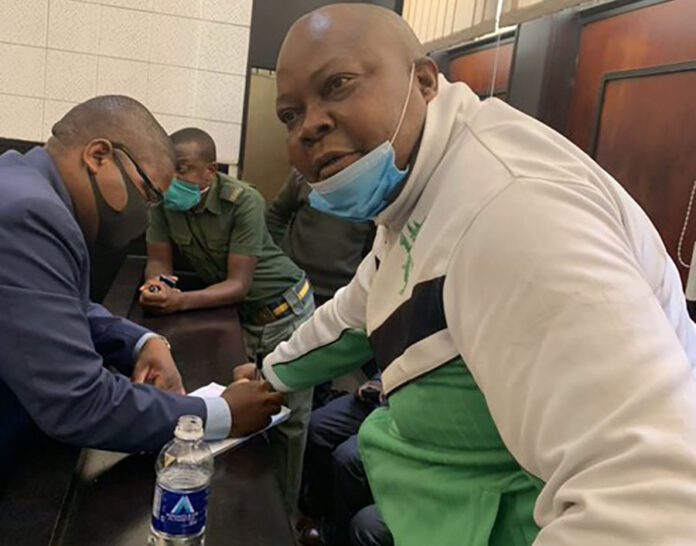 Job Sikhala the senior leader of the Citizens Coalition for change has been in prison for 3 months and 2 days since he was arrested for inciting violence charges. I sometimes wonder what he thinks on those long and lonely nights in the dungeon of Chikurubi, particularly about the “solidarity” from the party he dearly loves of CCC. But this is a story for another day.

Job Sikhala and Godfrey Sithole and twelve other residents of Nyatsime, Zimbabwe, have been detained by the Zimbabwean government for months without trial and bail. Two more residents were detained later.

A petition has been made to His Excellency the President of Zimbabwe on 9 September 2022 to stop the unlawful detention of Job Sikhala and Godfrey Sithole without bail and trial, and also more broadly to ensure that the judiciary is not used as a political weapon in which differential treatment is given to those apprehended by the state depending on real or perceived political affiliations and intentions, but that the law is empowered to take its proper course professionally, fairly and without favor so that justice and the rule of law are upheld in Zimbabwe under the Constitution of Zimbabwe 2013.

We, the originators of the petition Dr. Ibbo Mandaza – Tony Reeler, Tsitsi Dangarembga, Musa Kika, Phillan Zamchiya, Dr. Frances Lovemore, and Briggs Bomba, – ask all Zimbabweans and defenders of democracy in the world to sign this petition, which was delivered to the President of Zimbabwe along with the first signatories, to stop the illegal incarceration of Job Sikhala and his companions, to put an end to the unjust use of the judiciary as a political weapon and to promote the rule of law and democracy in Zimbabwe. Here is the petition, below. Detained Job Sikhala and Gordon Sithole along with 14 others need you to sign this petition, too.

We, the undersigned, are citizens and persons who care about Zimbabwe.
We petition Your Excellency to bring to your consideration, a most unusual situation obtaining in the arrest and detention of MPs Honourable Job Sikhala and Honourable Godfrey Sithole, and 14 residents of Nyatsime, Chitungwiza following the violence of 14 June 2022 in Nyatsime. Our duty to Zimbabwe constrains us from maintaining silence.
The multiple denials of bail these two have endured, multiple times in the Magistrates Court and multiple times in the High Court, makes for an unusual and unprecedented situation. We cannot think of any prosecution in recent times where one has been denied bail such numerous times, for offenses of inciting public violence and obstruction of justice, which Honourable Sikhala is charged with, and inciting public violence, which Honourable Godfrey Sithole is charged with. MPs Job Sikhala and Godfrey Sithole have now spent 85 days in pre-trial incarceration at Chikurubi Maximum Security Prison.

When this is juxtaposed to the timely and little-resisted granting of bail to high profile politically exposed persons accused of serious corruption, and they being flight risks, questions about the equal treatment of persons before the courts arise. There appear to be targeted differential treatment of those arrested and detained for charges emanating from political circumstances.

During their incarceration, Honourable Sikhala and Honourable Sithole have been subjected to leg irons; their lawyers have in some instances been denied access – in one instance prompting a court application, and other concerned individuals have been prevented from visiting them. Honorable Sikhala’s health has deteriorated.

While we all noted the political violence that occurred in Nyastime, it is curious that arrest and detention were targeted at members and perceived supporters of the political opposition. No one associated with any other formation was arrested. Among the 14 residents currently in detention are victims of arson who were arrested upon presenting themselves to a police station to report the arson.

In the case of Honourable Sikhala, he has been arrested over 60 times and has never been convicted. He has no record of escaping justice. To then deny him bail on the basis that he has the propensity to offend the law, is curious. This is despite the Constitution providing for bail as a right only to be denied in exceptional circumstances.

When the actors in the justice system appear to act in ways wholly contrary to their sworn duty and oath to uphold and implement the law without fear or favor, inferences of external hands in the work of the judiciary are bound to arise.

The offenses that Honourable Sikhala, Honourable Sithole, and the 14 residents of Nyastime are facing, have not had this kind of treatment visited upon anyone charged with them in recent times. This treatment, we are aware, was commonplace during the times of the liberation struggle. In those days, such kinds of arrests and detentions were known to be political, and many including those currently in public office suffered those and are well aware of their evils. An observer witnessing these developments cannot help but draw parallels. We believe that law must maintain its supremacy and moral high ground above politics.

The injustice is too visible to ignore, and we would be unfaithful in our devotion to the country if we remain silent. The law must have moral content, and its enforcement must have humanity. The Constitution of Zimbabwe is moral in both substance and process. The enforcement thereof is robbing the law and legal process that gives it authority, respect, recognition, and supremacy. Judicial authority itself derives from the people, per section 162 of the Constitution.

Your High Office is charged with the sacrosanct duty per section 90 of the Constitution to ensure that the Constitution and all other laws are faithfully observed, in particular, to ensure the protection of fundamental human rights and freedoms and the rule of law. Of the many rights, liberty and human freedom are cornerstone rights, a right that many Zimbabweans so reverently and fervently fought for.

The unusual trajectory that these cases have taken cannot be ignored. These cases, in our view, warrant an inquiry into how the justice system has come to this. The consequences of ignoring this will be too dire for Zimbabwe’s young democracy to bear. The criminal justice system was never created as a platform to silence or punish political dissent or the holding of divergent views. When that happens, as is happening to Honourable Sikhala, Honourable Sithole, and the 14 residents of Nyatsime, it erodes the value and essence of the criminal justice system and diminishes public confidence and trust in the justice system.

That should not be allowed to happen. Where the criminal justice system is weaponized against dissent, there are no victors. The justice system, the accused, and the generality of Zimbabweans derive no benefit from this. Should there be the cause, by all means, the law must take its course. But doing so without cause erodes confidence in the justice system.
We expect a resolution to this abuse of law and process.