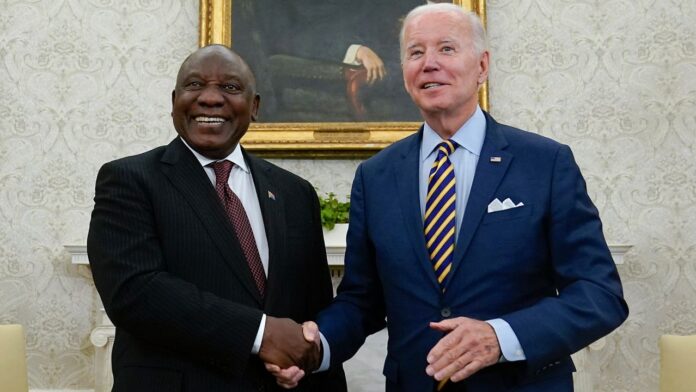 US President Joe Biden praised South Africa as a “vital voice” as he met with the country’s President Cyril Ramaphosa at the White House for talks that will touch on efforts to tackle the climate crisis, as well as ending the war in Ukraine. “Our partnership is essential in addressing many of the world’s pressing challenges … and South Africa is a vital voice on the global stage,” Biden told Ramaphosa in the Oval Office before the talks began on Friday afternoon.

“We have a lot to talk about. A lot is happening around the world,” Biden said. A senior Biden administration official told reporters earlier in the day that the United States president wanted to discuss the war in Ukraine with Ramaphosa, and hear the South African leader’s “thoughts on the best way forward”. Biden, who has led an international coalition in applying a slew of economic sanctions against Russian President Vladimir Putin over the war, wants South Africa’s help in those efforts. But the South African government has resisted calls to directly condemn Russia for the invasion.

The country, which has close historical ties to Moscow due to the Soviet Union’s support for the anti-apartheid struggle, abstained from a United Nations vote denouncing the invasion of Ukraine. In late May, Ramaphosa said “bystander countries” were paying the price of Western sanctions on Russia. “Even those countries that are either bystanders or not part of the conflict are also going to suffer from the sanctions that have been imposed against Russia,” he said at that time.

South Africa has long stated its position on sanction, pressing western countries to remove them as it pays a heavy price of catastrophic illegal migration. However the US foreign relations committee, a body which will decide if sanctions will be removed tweeted yesterday that South Africa was lying to the world that sanctions were causing economic migration in the region. It further encourages South Africa to start using its regional influence to encourage democratic reforms in Zimbabwe.