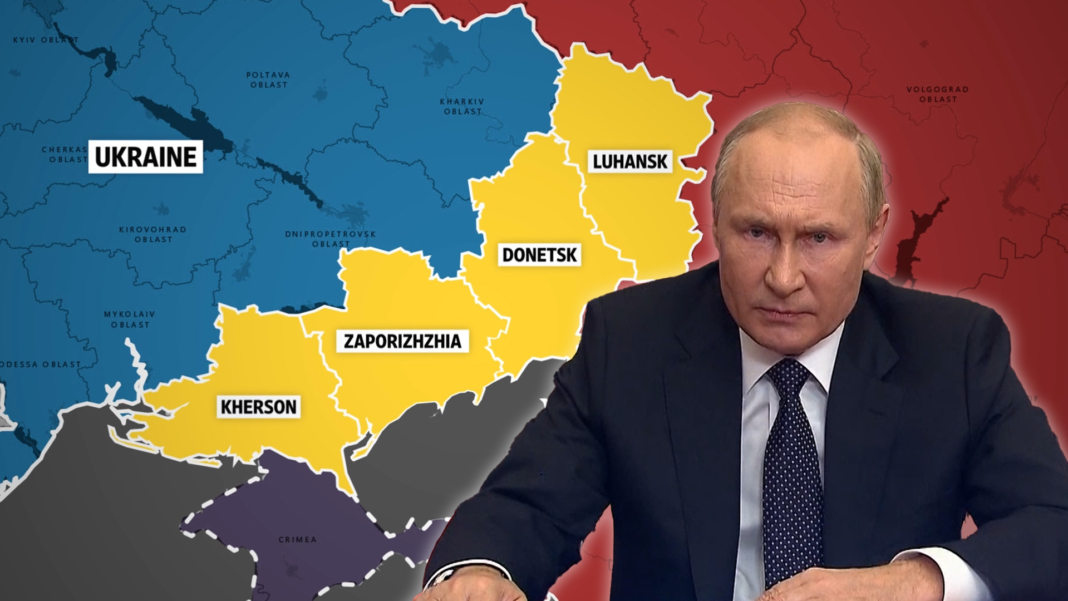 Vladimir Putin, the Russian President, called for peace talks with Kyiv as Russia formally annexed four Ukrainian regions on Friday. Speaking to hundreds of Russia’s top politicians in the Kremlin’s lavish St George’s Hall, Putin said voters in the referendums had made “an unequivocal choice” to join the Russian Federation. “We suggest returning to the talks but we’re not going to discuss the choice that people there have made, and Russia is not going to betray it,” he said. Kyiv and the West have dismissed the votes in Donetsk, Luhansk, Zaporizhzhia and Kherson as a sham, but Putin said those living in the four regions “are becoming our citizens for good”. Putin warned Russia would defend the newly annexed territories with “all means” at its disposal.

“This is a battlefield for our people, for a historic Russia, for future generations, our children and grandchildren,” he said at the end of a lengthy anti-Western rant. “We have to protect them from enslavement and experiments that can crippled their bodies and souls.” Putin and the four separatist leaders installed in the Ukrainian regions have signed agreements between the Russian Federation and the new Russian territories. The Ukrainian regions have now been incorporated into Russia. Before the signing, Putin finished his speech by saying: “The people of Ukraine’s territories have chosen to be with their people, the motherland.” Russian President Vladimir Putin accused what he called “Anglo-Saxon” powers of blowing up the Nord Stream pipelines. “The sanctions were not enough for the Anglo-Saxons: they moved onto sabotage,”

Putin said. “It is hard to believe but it is a fact that they organised the blasts on the Nord Stream international gas pipeline.” Vladimir Putin blamed the West for harbouring plans to destroy Russia, as he announced the formal annexation. He accused the West of hypocrisy by invoking a rules-based system; “This is all about lies and double standards,” he said at the Kremlin on Friday. “All of this is designed for idiots. Russia is not going to live under fake, rigged rules.” President Putin also voiced his long-term resentment of the West towards Nato’s westward expansion that he called a “filthy deception”.

“The West has said for centuries it is bringing freedom and democracy to the world. Everything is exactly the opposite,” Putin said. Russia is willing to enter talks with Ukraine, Vladimir Putin said. He insisted however that returning the annexed territories are out of the question. “We suggest returning to the talks but we’re not going to discuss the choice that people there have made, and Russia is not going to betray it,” the Russian president said on Friday of the sham referendums in Donetsk, Luhansk, Zaporizhzhia and Kherson. He said Ukrainians of the four regions “are becoming out citizens for good.”