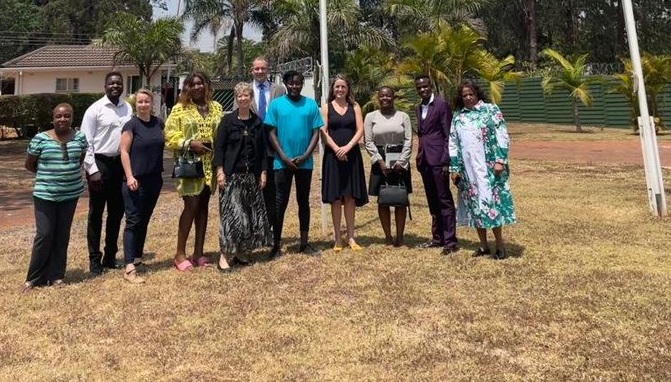 The British ambassador to Zimbabwe Melanie Robinson has sparked online outrage after she posted that she met members of the LGBTQ community in Harare to discuss the challenges that they face in the community. Her tweet went further to state that everyone has a right to be fully themselves whenever they are and to be accepted by everyone.

However, Zimbabweans are having none of that, at least judging by the response from her post where the hate brigade is camping in her comments sections spewing vitriol comments. The issue of LGBTQ rights was rejected when the Zimbabwean constitution was drafted nearly a decade ago.

However, the culture and tolerance continue to change at least in many urban areas around the country. For instance one of the biggest social media personality (Tatelicious) as she is popularly known is a member of the LGBTQ community. It’s hard to imagine that she would have pulled such a huge following a decade ago given her sexual orientation.

Here are some of the reactions to her post:

@NehorekaMina: Stop this nonsense…….. God said a man and a woman and who are we to change that?

@Simba: Even though it’s nasty for two men to have sex, it’s high for people to accept that gay people exist and they won’t vanish because some other people are against them.

@ngaralux: They can be themselves but you don’t force people to accept what they don’t want to accept. People have a right to determine what they accept and don’t accept.

@welly: I always stand with Mugabe’s stance, No LGBT rights in Zimbabwe and if anyone is found practicing such should be ….! That’s….. ungodly.

@KangomaMoses: ln my view ideals of sovereignty and self-determination plus democratically people should decide what is right for them via votes and other policy consultations you can’t say everyone has a right to be accepted by everyone democratically its a kind of autocratic