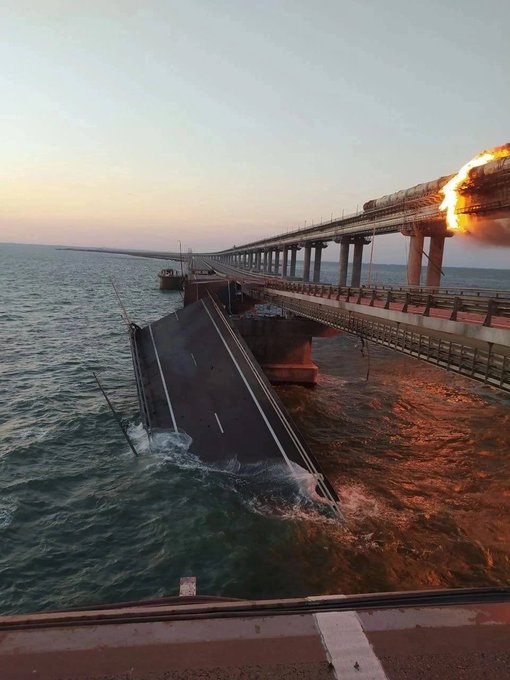 The Kerch bridge from Russia to Crimea – a hated symbol of the Kremlin’s occupation of the southern Ukrainian peninsular – has been hit by a massive explosion on the span that carries railway traffic. Images from the bridge showed a fiercely burning fire engulfing at least two railway carriages from a train on the bridge, accompanied by a vast column of black smoke.

The explosion, which witnesses said could be heard kilometres away, took place around 6am on Saturday while a train was crossing the bridge, although it was not immediately clear what caused it. Some images appeared to show a second fire at some distance from the main blaze. Later images also appeared to show that part of road bridge that runs parallel with the train tracks had collapsed.

When the Russian president opened its road span on 15 May 2018, driving an orange Kamaz truck across the bridge, he boasted of its significance. “In different historical epochs, even under the tsar priests, people dreamed of building this bridge. Then they returned to this [idea] in the 1930s, the 40s, the 50s. And finally, thanks to your work and your talent, the miracle has happened.” Heavily defended since the start of Russia’s fulls scale invasion of Ukraine, it was seen as important enough for Moscow to warn of reprisals if the bridge was targeted.

But on Saturday morning, in circumstances that are still unclear, a huge explosion rocked the Kerch bridge, collapsing part of the road carriageway into the Kerch Strait below and setting fire to fuel tankers on a train crossing the second railway span of the bridge. The enormous significance of the damage to the bridge, obliquely claimed by a senior adviser to the Ukrainian presidency, will become clear in the coming hours and days – not least whether Moscow feels compelled to retaliate for the attack.

“Russian illegal construction is starting to fall apart and catch fire. The reason is simple: if you build something explosive, then sooner or later it will explode,” David Arakhamia, the leader of the Servant of the People party, wrote on Telegram. “And this is just the beginning. Of all things, reliable construction is not something Russia is particularly famous for,” he said. Other Ukrainian officials were more celebratory while still stopping short of claiming responsibility, AP reported.

The secretary of Ukraine’s National security and defense council, Oleksiy Danilov, posted a video in his Twitter with Kerch bridge on fire on the left side and video with Marilyn Monroe singing her famous “Happy Birthday Mr President” on the right side. In Moscow, Russian foreign ministry spokeswoman Maria Zakharova said that “the reaction of the Kyiv regime to the destruction of civilian infrastructure shows its terrorist nature”. In August, Russia suffered a series of explosions at an airbase and munitions depot in Crimea, which underlined its vulnerability.