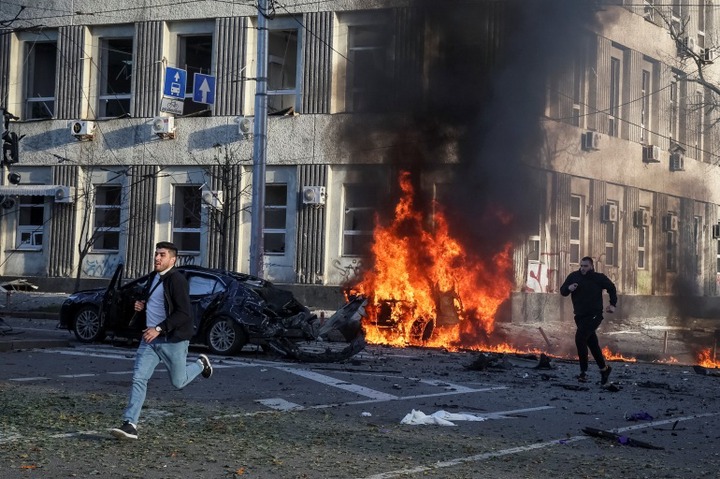 Other cities that were struck include Lviv, in the west, and Dnipro. The attacks are widely viewed Kremlin’s response to an explosion over the weekend that damaged the strategically important bridge for Russian forces, connecting the annexed Crimean peninsula to mainland Russia. As Ukraine mourned, Putin on Monday afternoon confirmed those views, saying the barrage was in response to Kyiv’s “terrorist” action. Ukraine has claimed direct responsibility for the bridge attack, but some officials did celebrate the incident. Ukrainian President Volodymyr Zelenskyy said on his Telegram account that Russia is “trying to destroy us and wipe us off the face of the earth.” “Please do not leave (bomb) shelters,” he wrote. “Let’s hold on and be strong.”

Zelenskyy said that Russia was trying to totally destroy Ukraine and that ordinary people on their way to work during the Monday morning rush had been killed. “They have two targets. Energy facilities throughout the country … the second target is people,” he added. Foreign Minister Dmytro Kuleba said Putin’s “only tactic is terror on peaceful Ukrainian cities”. “He will not break Ukraine down. This is also his response to all appeasers who want to talk with him about peace: Putin is a terrorist who talks with missiles,” Kuleba tweeted. Russian President Vladimir Putin said the strikes on Monday came in retaliation against the Ukrainian attack on a bridge to Crimea and other attacks in Russia that he described as “terrorist” actions. Putin said the Russian military launched precision weapons from the air, sea and ground to target key energy and military command facilities. “It was not possible to leave (Ukrainian attacks) unanswered.

If they continue, the response from Russia will be severe and correspond to the level of threat,” the Russian president said at the beginning of a televised meeting of his security council. The president of the European Parliament said the strikes in Kyiv were “sickening”. “It shows the world, again, the regime we are faced with: One that targets indiscriminately. One that rains terror and death down on children,” Roberta Metsola tweeted. Meanwhile, a spokesman for the bloc’s foreign policy chief Josep Borrell said the EU believes Russia’s missile attacks on civilians in Ukraine “amounts to a war crime”. “Indiscriminately targeting people in a cowardly, heinous hail of missiles on civilian targets is indeed a further escalation,” the spokesman, Peter Stano, said.

“The European Union condemns in the strongest possible terms these heinous attacks on the civilians and civilian infrastructure…. This is something which is against international humanitarian law and this indiscriminate targeting of civilians amounts to a war crime,” he said. “Multiple strikes in central Kyiv and across Ukraine this morning. Russia escalates its barrage of attacks on Ukrainian civilians,” Bridget A. Brink, the US ambassador to Ukraine, tweeted.

The Group of Seven (G7) countries will hold talks on Tuesday after Russia’s missile strikes, a German government spokesperson has said. Ukrainian President Zelenskyy will address leaders at the start of the virtual talks, said the spokesperson, adding that German Chancellor Olaf Scholz had assured Zelenskyy of support in a phone call. The strikes are “unacceptable”, UK Foreign Secretary James Cleverly said on Monday. “This is a demonstration of weakness by (Vladimir) Putin, not strength,” he tweeted, adding that he had contacted his Ukrainian counterpart Kuleba.

China’s Foreign Ministry on Monday called for de-escalation. “We hope the situation will deescalate soon,” ministry spokesperson Mao Ning said at a regular press briefing. French President Emmanuel Macron expressed his “extreme concern” about the Russian strikes during a call with his Ukrainian counterpart Zelenskyy and promised that France would increase military aid. “The president spoke of his extreme concern about strikes that have caused civilian victims,” Macron’s office said in a statement.

“He reaffirmed his full and complete support for President Zelensky and the commitment of France to increase its support for Ukraine, in line with the needs expressed by Kyiv, including in terms of military equipment.” Moldova’s foreign minister said several of Russian cruise missiles targeting Ukraine had crossed its airspace, and summoned Moscow’s envoy to demand an explanation. “Our thoughts are with the victims of the brutal strikes,” Nicu Popescu said on Twitter. Canada’s Minister of Foreign Affairs Melanie Joly called the strikes “shocking and horrifying” adding that targeting civilians was a “war crime”. “Canada stands with the people of Ukraine,” she tweeted.