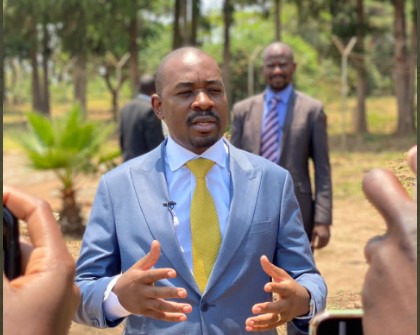 Chamisa was Thursday left disappointed after another failed attempt to see jailed lieutenants Job Sikhala, Godfrey Sithole and 16 party activists who have all been languishing in remand prison at Chikurubi since June, charged with the violence that rocked Nyatsime in the aftermath of CCC activist Moreblessing Ali’s shock murder May this year.

After his first attempt to visit prison was denied two weeks ago, Chamisa engaged lawyers to demand access.

Through correspondence, prison officials appeared to have finally given in to his demands although they set tough conditions for the popular politician to abide by while in the precincts of the country’s biggest jail.

But to his frustrations, the opposition chief was made to wait for more than 2 hours only to be told by the officer in charge, one Hukurume he could not proceed inside to see his comrades on Ziyambi orders.

“I am so disheartened that after we have just been made to wait for three hours, we were invited to the office of the officer in change Mr Hukurume who indicated to us it’s unfortunate that we were not able to see honorable Job Sikhala and the other Nyatsime colleagues, because the Minister of Justice has instructed that we can’t see them,” Chamisa said.

Reached for comment, Ziyambi fumed at what he found to be mischievous dragging of his name into a prison circus. “That guy is a pathological liar; who did I give that instruction?” Ziyambi said. “I am not even aware of his request to go and visit prison. I do not stoop that low to go down to administer regulations on who is supposed to go to prison and who should not.

“I have never been asked for permission for relatives to visit prisoners. I am actually hearing it from you that he is saying I denied him entry, when? I am very busy.” Ziyambi accused the opposition leader of playing to the gallery.

“Chamisa is a politician; he plays to the gallery. I don’t know about it. “Call the officer in charge and ask him about it. I think that is the fairest thing that you can do because you want me to comment on hearsay. Call the actual person. “I cannot comment on hearsay. He never came to me but he is accusing me over things that happened when I was not there.

“I have not spoken to any prison officer concerning Chamisa,” he said. However, attempts to seek comment from Zimbabwe Prisons and Correctional Services Chief Director Legal Resources and Corporate Affairs Commissioner Willie Risiro were not successful. Commissioner Risiro is the one who issued the letter granting Chamisa the go ahead to visit his comrades.