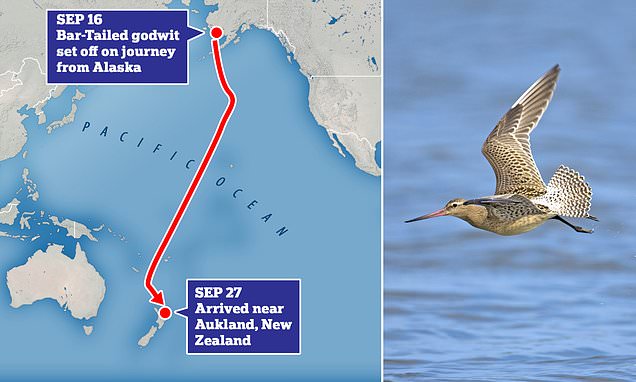 A young bird has become a world record holder by flying 8,425 miles non-stop from Alaska to Australia in 11 days. The five-month-old bar-tailed godwit left Alaska on October 13 and touched down in Ansons Bay in northeast Tasmania, Australia on October 24. Scientists say the bird, known simply as 234684, flew a minimum of 8,425 miles (13,560km) in 11 days and one hour without stopping. It’s one of many birds that scientists in Alaska had attached a 5G satellite tag to in order to track migration patterns. ‘This godwit with the great number 234684 departed from Alaska on 13 October and certainly looks to have flown non-stop to Tasmania,’ the Pukorokoro Miranda Shorebird Centre announced on its Facebook page.

‘This will not be the first one to make this flight as godwits are frequent summer visitors to Tasmania and we are sure this one was with a group but it is the first time a tagged bird has flown between Alaska and Tasmania.’ A local birdwatcher is now heading to Ansons Bay to look for it, although heavy rain in the area may make travelling to the site difficult. The godwit’s route took it over islands in Oceania, including Vanuatu and New Caledonia, but it resisted the chance to stop off and refuel, instead continuing straight to Tasmania. In doing so, it beat the previous long distance record of 8,108 miles (13,050km), set by an adult male bar-tailed godwit known as 4BBRW in 2021.

This previous record-holder has been ‘blown out of the water by this young upstart’, the post said. Eric Woehler, an expert at Birdlife Tasmania, said the bird probably lost ‘half or more of its body weight’ during continuous day and night flight. The flight was particularly risky because the species is unable to land on water. ‘If a godwit lands on water, it’s dead,’ Woehler told the ABC. ‘It doesn’t have the webbing in its feet, it has no way of getting off the water. ‘ So if it falls into the water from exhaustion, if bad weather forces it onto the ocean surface, that’s it.’ The bar-tailed godwit (Limosa lapponica) is one of four living species in the godwits or Limosa genus. It has distinctive brick-red breeding plumage, long legs, and a long upturned bill.

Amazingly, the godwit is able to shrink and then regrow its internal organs, to make space for fat stores that aid long-distance flight. The bird absorbs up to 25 per cent of the tissue comprising its liver, kidneys, and digestive tract. Only when the bird completes its migration are these organs reformed in their entirety. Its migration across the Pacific Ocean from Alaska to Oceania is the longest known non-stop flight of any bird. Australia’s coastal and freshwater wetlands are a resting and feeding zone for the migratory shorebirds.

Many travel along the East Asian-Australasian Flyway, which extends from breeding grounds in the Russian tundra, Mongolia and Alaska south through Asia to non-breeding areas in Indonesia, Papua New Guinea, Australia and New Zealand. One bar-tailed godwit subspecies spends the winter in western coasts of Europe and Africa from the British Isles and the Netherlands down to South Africa. According to the Wildlife Trusts, large numbers of the bird can be spotted in estuaries such as the Thames, Dee, Humber and Wash. Highest numbers of bar-tailed godwits are seen in the UK between November and February, with numbers starting to build in July and August and falling off in March and April, says the RSPB.

The most fear Helicopter in the world.