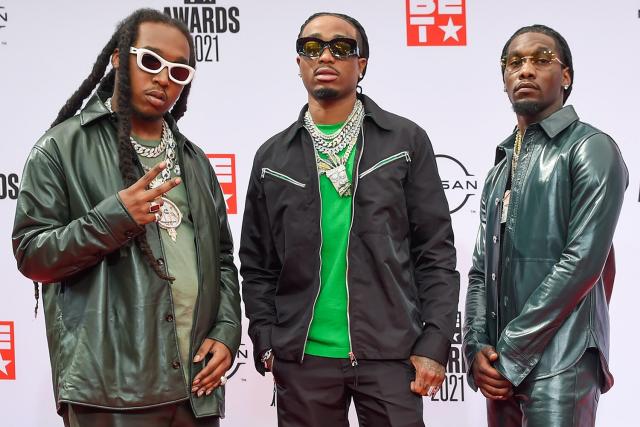 Takeoff, who was one-third of the platinum-selling rap group Migos, was shot and killed early Tuesday in Houston, Texas, a source close to the group confirmed to CNN. He was 28. Police received a call of a shooting in progress around 2:34 p.m. local time, Houston Police Department Chief Troy Finner said at a news conference Tuesday. Officers arrived to the 810 Billiards & Bowling Houston where there was a private party and found a dead man at the scene. Two other people – a 23-year-old man and 24-year-old woman – were also injured in the shooting and took themselves to the hospital with nonlife-threatening injuries, said Sgt. Michael Arrington with police department’s homicide division.

Employees told police an argument took place after the party ended when a large group of people gathered at the front door area outside of the building, which led to the shooting. At least 40 people were at the scene at the time of the shooting, Finner said. “A lot of people that were there fled the scene and did not stick around to give a statement,” Arrington said. Finner identified the deceased man as Kirshnik Khari Ball, also known as Takeoff of the rap group Migos. “I got many calls from Houston and outside of Houston, and everyone spoke of what a great young man he is, how peaceful he is, what a great artist (he is),” Finner said, later adding that Takeoff was very well respected and nonviolent.

I would not expect him to be involved … We have no reason to believe that he was involved in anything criminal at the time,” Finner said. Houston Mayor Sylvester Turner said they have met with Takeoff’s mother. “It doesn’t matter how famous you are. You may not be famous at all,” Turner said. “Anybody who loses his or her life is a life lost, and there are family members and friends who are grieving as a result.” The news of Takeoff’s death was a blow to the hip-hop community, still recovering from the fatal shooting of rapper PnB Rock in September. Stars took to social media Tuesday to pay tribute and express their condolences over the death of Takeoff. Gucci Mane, who recently collaborated with Takeoff on the track “Us vs. Them,” wrote on Instagram, “This broke my heart” upon learning the news.

“This is horrible. From the tragedy of the death to the tragedy of there being a video of it online,” actress Keke Palmer shared on Instagram, referring to a video that appears to show the deceased rapper in the moments after he was shot. “It’s all just tragic and I am so sorry to his whole family and all he touched. Really terrible.” Rapper Ja Rule aired his grievances about Takeoff’s violent death on Twitter, writing, “this sh*t has to STOP … sending love to friends and family.” The Atlanta Falcons also released a statement on Twitter. “Takeoff’s legacy lives on in Atlanta and across the world,” the team tweeted.

Born in Lawrenceville, Georgia, Takeoff began performing with his uncle and fellow rapper Quavo, along with Offset, as Migos in 2008. The trio found fame with their 2013 single, “Versace.” Their success only increased in 2016 with the release of their hit “Bad and Boujee,” which featured fellow recording artist Lil Uzi Vert. The single quickly became an internet sensation, giving birth to a multitude of memes that played off the lyrics “rain drop, drop top.” The song got an even bigger boost after “Atlanta” creator and star Donald Glover name-dropped the single during an acceptance speech at the 2017 Golden Globe Awards.

“I really wanna thank the Migos, not for being in the show, but for making ‘Bad and Boujee,’” Glover said at the time. “Like that’s the best song ever.” Takeoff and Quavo recently formed the duo “Unc & Phew” and released their debut album, “Only Built for Infinity Links,” on October 7. The music video for their song “Messy” was released on Monday. During a recent conversation on the podcast “Drink Champs” just days before his death, Takeoff accepted accolades for his stellar performance on the new project. “It’s time to pop it, you know what I mean? It’s time to give me my flowers, you know what I mean?, Takeoff said. “I don’t want them later on when I ain’t here.”

He was failing to satisfy me: Burna Boy’s ex girlfriend reveal the reasons they broke up