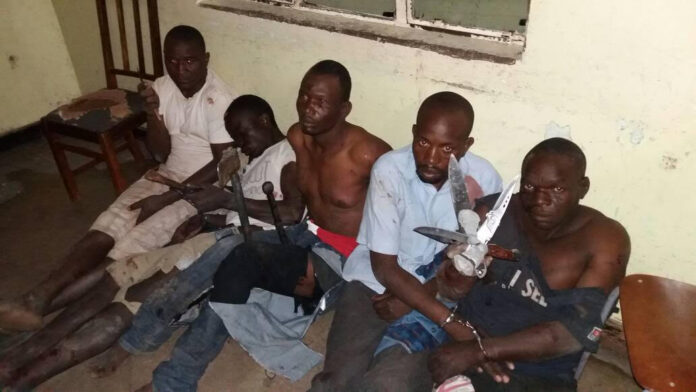 Retired police officers and soldiers are making a comeback in Zimbabwe, working for private security companies as armed robberies spiral out of control. The veterans are the much-needed bridge to link private security firms and the police which is too overwhelmed, and under resourced to monitor robberies. This as the Zimbabwe National Statistics (Zimstats) agency revealed that between 2020 and 2021 there was an average of 25 armed robberies per day in the country.

The statistics body said since January this year, there had been a 9% increase in robberies with 100 suspects arrested, of which 28 were convicted. Zimbabwe Republic Police (ZRP) spokesperson Assistant Commissioner Paul Nyathi attributed the increase to people’s lack of trust in the banking sector. He asked: Just imagine someone keeping US$1 million [about R17.9 million] in an office or at home? Lobels, a confectionary company, lost about R21.48 million in American dollars (US$1.2 million) to robbers in March after its offices were raided in the second largest city, Bulawayo.

No one has been arrested for the crime. One of the country’s biggest gold producers, How Mine, that is owned by the Metallon Corporation, which was founded by South African mining magnate Mzi Khumalo, was robbed of 12kg of gold in transit. The suspects, who made off with the gold worth about R12 million, were linked to four other robberies. Security firm business boom For security companies, the situation is volatile considering some of the robberies are mounted on their transit routes. Hence, the call for more collaborative efforts with government arms.

“Looking at what’s happening, we have to work hand in hand with the police force and army more than ever,” said Bekezela Moyo of Allied Security. Allied Security is one of many private security firms. It boasts retired senior army and police officers in its ranks. But that is not enough. High-tech arms make a difference. In most reported robberies, the AK-47 is the weapon of choice for robbers. The arms are often stolen from government armouries. In August, Zimbabwe President Emmerson Mnangagwa announced a two-month grace period for the public to hand in unlicenced guns.

The amnesty also covered guns smuggled into the country. Moyo said security companies, in addition to investing in other high-tech security apparatus, were also turning to more advanced weapons to protect their clients. Clients trust you with their safety and when you fail, that’s it. Money or valuables lost under your protection when you are paid to keep them safe is what affects a security company’s reputation. That’s why you need weapons that when attacked by robbers, especially during cash-in-transit situations, you can stand your ground and fend them off,” he added.

Some of the biggest targets in robberies have turned out to be mining companies moving gold, businesses that deal in cash, and banks. Besides their internal security and the police, they now have budgets for external contract security. “You need more eyes on the ball more than ever. That’s why security companies of late are training recruits and also hiring from the police force,” Moyo said.

Retired veterans brought “their wealth of seasoned experience which comes in handy when handling firearms. They are not trigger-happy but tactical. They also teach young recruits in the sector how to handle high-pressure situations”, he added. But poor working conditions and remuneration in the sector affect security personnel in their roles. The Private Security Workers Union (PSWU), an umbrella body that represents security guards, last month picketed at Fawcett Security company in Harare, protesting poor pay and working conditions.