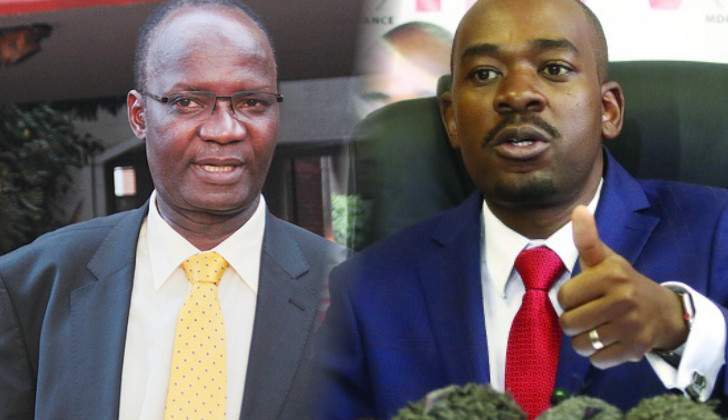 “Please Mama, save us,” Professor Jonathan Moyo and his then-ally, Saviour Kasukuwere, pleaded with former first lady Grace Mugabe in a telephone call, because the Zimbabwean army was in no mood to take prisoners during the coup that dislodged president Robert Mugabe. Moyo and Kasukuwere were part of the alleged “criminal elements” around Mugabe who were mentioned by army commanders during a press conference in Harare on 14 November 2017.

On that night, they sought refuge at Kasukuwere’s eye-catching mansion in Harare. When bullets were sprayed as tankers rolled into Harare, Kasukuwere, Moyo and their families were allegedly hiding in a bunker at the mansion. However, their escape to Mugabe’s state-of-the-art palace – the “Blue Roof” in Borrowdale, the richest square mile in Harare – had everything to do with the bravery of Mugabe’s relatively young wife. Their comrade, then recently appointed finance minister Ignatius Chombo, had been captured from his home in military commando fashion. Soldiers broke into Chombo’s house through a ceiling, bypassing security at the property and left with him the same way. Still in his pyjamas and with his face covered, Chombo was driven for about a hundred kilometres to an unknown destination, where he was held hostage for the duration of the coup.

The first days of the putsch to dislodge the Mugabe regime gave a glimpse of the luxury politicians who were part of the administration had enjoyed. In a video taken when soldiers besieged Kasukuwere’s house, someone could be heard asking a worker how Kasukuwere raised the money to build such a mansion. He responded that his boss was also a businessman. Asked what business Kasukuwere was into, the worker stammered and eventually claimed that he had taken money from the government. That was enough for low-ranking soldiers to think they were working towards a legitimate cause when, in reality, the coup was for their bosses and the political elite to preserve their interests. Moyo and the Generation 40 (G40) politicians sought to change the narrative in Zimbabwe’s politics, but the old guard would have none of it. When civilian politics failed them, the barrel of the gun was their “joker” poker card – and they used it. Speaking to News24 five years later, 24, Moyo refused to say more than what had already been made public about their great escape from the jaws of “the crocodile”, as President Emmerson Mnangagwa is monikered.

“Respectfully, I am not in a position to talk about how I fled Zimbabwe in November 2017, beyond what is already in the public domain; and in any event, most of the narrative is now water under the bridge,” he said. Five years on, Moyo, Kasukuwere, and Patrick Zhuwao, Mugabe’s nephew, are still in exile. Asked when he could be expected to return, Moyo said: “I do not know.” Life didn’t stop for him. Besides spending time with family, he had been working and studying further and pursuing his passion – music. “I have been studying, doing consultancy work, teaching, mentoring graduate and doctoral students, making and producing music, and, above all, raising and taking care of our last-born girl child, who is set for university next year,” he said.

After the army assisted Mnangagwa to usurp power, Mugabe declared in July 2018 that he would vote for the Movement for Democratic Change (MDC) Alliance’s Nelson Chamisa. Moyo, too, out of anger, supported Chamisa, who now leads a rebranded party, the Citizens Coalition for Change (CCC). However, he feels what they did was wrong because their actions were “detrimental to the interests of ordinary Zanu-PF members and supporters, who did no wrong to us on or after 15 November 2017”.

At the time, the #ZanuPFMustGo movement was born. Looking back, Moyo said: “Yes, I supported Nelson Chamisa and the hashtag, but the hashtag was not a movement; it was just an ideologically bankrupt slogan.”

Moyo said he noticed that Chamisa wanted to use them (G40) as “attack dogs”. “Since the November 2017 Zim military coup, Chamisa and his supporters manufactured an imbroglio wherein the so-called G40 – which was specifically targeted by the coup – would be indefinite, if not permanently caught between a rock and a hard place, such that on the one hand, G40 would remain at war with Zanu-PF, and on the other hand, it would remain at war with MDC formations, including the CCC; Chamisa’s personal project. “Chamisa wanted the so-called G40 to be in a permanent state of war against everyone, for him to hold it hostage as his attack dog against Zanu-PF,” Moyo said. He added that while he worked tirelessly with Chamisa, the latter didn’t want the relationship to be known as long as it benefitted him. He said: In fact, Chamisa and his supporters had banked on having me, in particular, fighting Zanu-PF for them, with Chamisa telling his base that he has no dealings of any kind with me; and his trolls telling Chamisa’s base that I am supporting him, not because I love him, but because I hate Mnangagwa. “That was Chamisa’s game plan,” he said. Moyo said he spent three and a half years working with Chamisa in an “open, transparent and public” manner, but during that time, “Chamisa never acknowledged that work in public”. “He always gave the impression that he and I were not working together at all; yet we interacted many times a day, 24/7, between 2018 and early 2022,” he said. They finally parted ways after Moyo challenged Chamisa on his reasons for being secretive about their dealings. Moyo said Chamisa’s actions were somewhat “satanic” and “undemocratic.” “When I challenged Chamisa about [the] duplicitous stance in November 2021, he said no formidable tree makes public its roots. I told him that his analogy was inappropriate, undemocratic, unprofessional, wrong, and satanic; he mumbled some mumbo jumbo, and I bade him farewell, which later turned out to be for good,” he added.

Last week, Moyo and Zhuwao wrote an open letter to Zanu-PF members, apologising for their pro-Chamisa stance in 2018. Their letter has divided opinions and interpretations. In Moyo’s words, the apology angered some in the CCC. He said: So, our apology upset Chamisa and his supporters because it exposed and exploded their myth that, for their political benefit, they had locked us between a rock and a hard place. He added that while the letter showed that they had cut ties with the CCC, it didn’t mean they were rejoining or seeking to rejoin Zanu-PF. “It (the letter) is not to the legal persona or entity called Zanu-PF, nor is it an application or anything of that sort. And for the avoidance of needless doubt, the apology is for our having used and associated ourselves with the hashtag #ZanuPFMustGo between 2018 and 2020.

“Although we stopped using or associating with that hashtag some two or so years ago, we felt it necessary to explain ourselves and to sincerely apologise to Zanu-PF members on the fifth anniversary of the 15 November military coup, because of the collateral damage they suffered from our use of and association with the hashtag, when Zanu-PF members were, in fact, innocent parties in the whole saga,” he said. He added that the letter was received well by its recipients, Zanu-PF members. “I am not aware of even one Zanu-PF member or supporter who feels let down by it. The letter’s recipients are happy, and we are happy. That is good enough, and neutrals are saying our letter is informative and politically exciting,” Moyo said.

Moyo didn’t hide that he still had the energy to contribute to the country’s development as a cabinet minister or senior government official. As things stand, the country is run by Zanu-PF. Its leader, Mnangagwa, openly told Moyo that he was a trained killer. This was during a heated politburo session during which Moyo presented documentary evidence to prove that Mnangagwa was planning a coup against Mugabe. Mnangagwa threatened to separate Moyo’s head from his neck. With Moyo in exile and the letter to Zanu-PF members out there, some thought that he had mended fences with Mnangagwa. However, there has been no engagement between the two for years. “It is common cause that there has been no engagement of any kind at that level or to that effect,” he told News24.

At the turn of the century, Zimbabwe found itself at loggerheads with the international community when Moyo was Mugabe’s information minister. Targeted sanctions and withdrawal from the Commonwealth happened during his time as government spokesperson. For years Moyo was steadfast that the sanctions were detrimental to Zimbabwe. Even while opposed to Zanu-PF, it is one constant he has shared. Last week a team was in the country to assess Zimbabwe’s bid to rejoin the Commonwealth. Moyo sees Zimbabwe’s likely readmission as a positive step. “The Commonwealth should indeed readmit Zimbabwe because the objective conditions in 2022 have materially and radically changed from those that were obtained in 2003, and the readmission is to the mutual interest of both parties and will be of substantial benefit to the generality of Zimbabweans. “Zimbabwe’s readmission to the Commonwealth is the one big thing that needs to happen for the long overdue normalisation of Anglo-Zim relations,” he said.

Russia’s economy has finally fallen into recession, 8 months after it invaded Ukraine