Home Reviews Step aside BMW: 2023 Mercedes-AMG S63 revealed, here are its specs and... With the wraps having come off of the W223 generation Mercedes-Benz S-Class as far back as September two years, the three-pointed star has finally unveiled the first derivative fettled by its AMG division in Affalterbach, the new AMG S63 E-Performance. Officially the most powerful S-Class ever made with more grunt than any previous generation S600 or AMG S65, the S63 E-Performance continues AMG’s tradition of using the standard wheelbase S-Class as a base for the nomenclature, meaning dimensions are unchanged from the standard model.

Aesthetically, the adaptions are comparatively restrained to previous AMG S-Class’ in the fitting of the trademark Panamericana grille for the first time on Benz’s flagship, the so-called jet wing front apron, chrome and black AMG badges, 20 or optional 21-inch AMG light alloy wheels and a pair of dual exhaust outlets integrated into the diffuser on either side of the rear bumper.

Inside, the usual array of veneer and material choices apply, but as standard, the S63 gets Nappa leather upholstery with AMG embroidered headrests for the front chairs, the AMG Performance steering wheel, bespoke stitch work on the seats, dashboard and doors, and AMG specific graphics and readouts within the MBUX infotainment system, digital instrument cluster and Head-Up Display. Unlike lesser standard length models, the S63 E-Performance is a strict four seater as the centre rear seat has departed in favour of the console complete with the removable seven-inch MBUX tablet and storage area, plus the option of the dual 11.6-inch MBUX display screens.

More extensive are the revisions and even reworkings underneath the S63’s skin where the second generation MRA platform has been refined in order accommodate the performance electric hardware as per the E-Performance moniker that premiered on the AMG GT63 E-Performance last year. Besides the standard fitting of the AMG-tuned Active Roll Stabilisation system and AMG Performance steering with rear-axle steer, the 4Matic+ all-wheel-drive system has been recalibrated, the torsional stiffness increased and the rear struts constructed out of lightweight aluminium.

In addition, the recess for the main battery has been made out of reinforced plastic, the AMG Ride Control+ air suspension equipped with adaptive dampers and the Electronic Stability Control reprogrammed to suit not only the electric motors and battery, but to allow for faster slip detection. Along with new mounts for the internal combustion engine, rear stabiliser bars made from aluminium and stiffer rear suspension cross-braces, no less than seven drive modes have been integrated into the Dynamic Select system namely, Electric, Slippery, Battery Hold, Comfort, Sport, Sport+ and Individual. Not left out is stopping power, which comes courtesy of a composite material six-piston caliper setup at the front and single at the rear, with respective disc sizes of 400 mm and 380 mm. As ever, buyers can opt for the performance carbon ceramic setup as a cost-option.

Of course, all of the changes have been as a result of the new powertrain that combines the stalwart 4.0-litre bi-turbo V8 with a 13.1-kWh battery powering a 140 kW electric motor mounted on the rear axle. Known as the P3 by Mercedes-AMG, unit is located within the nine-speed MCT transmission, itself sharpened-up, and offers four stages of regenerative braking.

The end result though is a combined system output of 590 kW of power and a monumental 1 430 Nm. Limited to 250 km/h or 290 km/h with the optional AMG Driver’s Package in place, the S63 E-Performance will still get from 0-100 km/h in 3.3 seconds despite 2 520 kg. Being a plug-in hybrid, the claimed all-electric range is 33 km with Benz describing the entire setup has having been designed for rapid power delivery with lower emissions and not for obtaining the highest range as this will likely clash with the principle behind the AMG EQS 53. 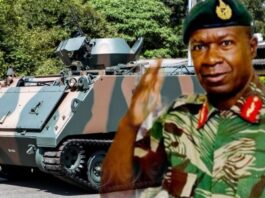 Zimbabwe military ranked as 16th most powerful army in Africa for...