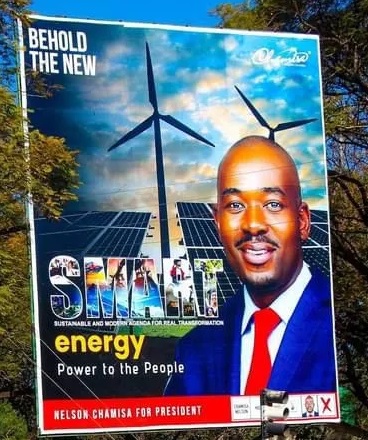 Citizens Coalition for Change (CCC) leader Nelson Chamisa has pledged to end Zimbabwe’s persistent power crisis by 2027, if elected to form the next government 2023. The opposition leader weighed in with a raft of own solutions in an elaborate energy policy proposal he is confident will rescue the troubled nation from the throes of a power crunch that threatens to decimate industry and deepen poverty in a country that has seen the worst of economic crises before.

Zimbabwe’s energy woes are a matter of public record. However, the past few weeks have been dire, with the country failing to meet its current daily demand of 2000 megawatts, generating slightly more than 500 megawatts per day. This week, the government promised to address the power outages by increasing energy imports, a decision critics say is too cosmetic and does not address the root causes of a protracted crisis linked to the Zanu PF led administration’s failure to invent lasting solutions to energy problems.

Through his Twitter handle Thursday, Chamisa unveiled his party’s five point plan he said was informed by the “suffering of our citizens due to the lack of sufficient energy to carry on with our economic activities”. “We plan to pursue sustainable energy for all and to mobilize action from all sectors of society in support of three interlinked objectives to be achieved by 2027: providing universal access to modern energy services; doubling the global rate of improvement in energy efficiency; and doubling the share of renewable energy in the global energy mix in Zimbabwe.

“To expand generation by modernising our existing power plants through life extension technologies that are smart and green by 2027. “To build an energy efficiency revolution that creates an energy surplus by encouraging demand side management, energy efficiency and optimal use of our water resources in our hydropower generation systems dispatch and operations,” said Chamisa. Added the opposition chief, “To provide enough project financing and investment for power generation, transmission, distribution and supply systems with an emphasis on rural development and urbanization as well as install ethical, competent and professional human capital to run our utilities.

“To source through the private sector the sum of USD 300 million dollars that is required to modernise our grid. Zimbabwe’s transmission infrastructure is archaic. “We will allow private players in the form of independent power producers (IPPs).” Zimbabwe appears to be heading for a gloomy, not-so-jolly holiday season marred by 10-16 hour power outages that have already dampened the ongoing World Cup frenzy. Last Friday, while addressing the media on the power crisis, energy minister Soda Zhemu dropped the bombshell the Kariba power station would be completely shut down during the holidays.

Hwange Thermal Power Station, the country’s largest coal-fired power station, whose infrastructure had deteriorated over the years, has also proven to be unreliable, extinguishing the ray of hope for a joyous holiday. The ongoing power outages have posed a myriad challenges on the country’s economic, health, and social spectrum, with water and service delivery woes worsening mostly notably in the country’s two largest cities, Harare and Bulawayo.

Government spokesperson Nick Mangwana recently admitted the power outages were causing “distress, inconvenience, and cost to the citizenry and business,” and that the government was tasked with implementing immediate mitigation measures to restore normalcy. Chamisa blamed the current energy crisis on decades of under-investment in energy infrastructure, lack of visionary leadership and corruption, emphasizing the need for an immediate solutions. He said it was time the country prioritised and implemented cost-effective and sustainable energy sources, social upliftment through community involvement, gender equality, and job creation.

“The renewable energy sector in Zimbabwe should consist of solar, hydro, wind, geothermal and biomass (which includes bagasse (sugarcane based), biogas, forestry and sawmill waste) all of which have barely been fully exploited. “Zimbabwe has vast renewable energy resources that are presently underutilized. Our Citizens’ Government will prioritize a clean energy investment that will make power shortages, load shedding and the current dark age a thing of the past.

“We will promote sustainable Feed-in Tariffs (FiT) for small hydropower, biomass, and geothermal projects as well as corruption free competitive bidding for solar photovoltaics (PV) and concentrating solar power (CSP), wind and other renewable energy sources. “Off-grid energy will be promoted and incentivised to make them a viable option for our Citizens government 100% electrification of Zimbabwe by 2035. “We will implement sustainable energy development based on scientific and engineering studies that will continuously launch projects for solar power, energy Internet, carbon Capture, utilization & storage (CCUS), nuclear, energy storage, hydrogen and total electrification of our country,” he said.