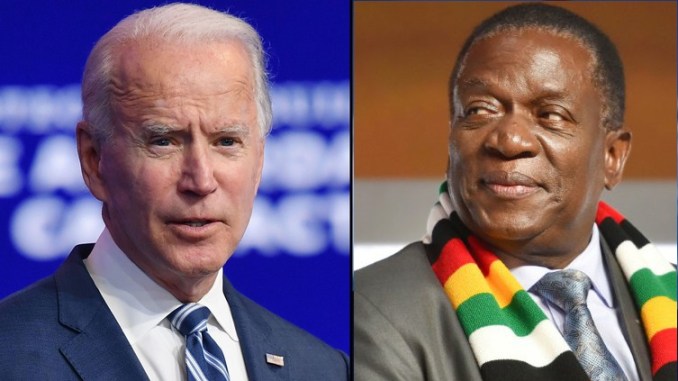 The United States on Monday slapped corruption sanctions on one of President Emmerson Mnangagwa’s sons as the U.S. prepares to host a major summit of African leaders in Washington.

The Treasury Department announced it was hitting four Zimbabweans and two companies with penalties for their roles in undermining democracy and facilitating high-level graft. Those sanctioned include Emmerson Mnangagwa Junior,whose father is missing the US-Africa Leaders Summit starting on Tuesday due to travel sanctions.

Treasury said the younger Mnangagwa has been in charge of his father’s business interests related to prominent businessman Kudakwashe Tagwirei and his Sakunda Holdings company, both of which are already subject to U.S. sanctions. The sanctions freeze any assets the targets may have in U.S. jurisdictions and bar Americans from doing business with them.

“We urge the Zimbabwean government to take meaningful steps towards creating a peaceful, prosperous, and politically vibrant Zimbabwe, and to address the root causes of many of Zimbabwe’s ills: corrupt elites and their abuse of the country’s institutions for their personal benefit,” Treasury said in a statement.

“The goal of sanctions is behaviour change,” it said. “Today’s actions demonstrate our support for a transparent and prosperous Zimbabwe.”

In addition to Mnangagwa Jnr, Monday’s sanctions target Tagwirei’s wife, Sandra Mpunga; Nqobile Magwizi, and Obey Chimuka, along with the firms Fossil Agro and Fossil Contracting. All of them are connected to Tagwirei and Sakunda Holdings.